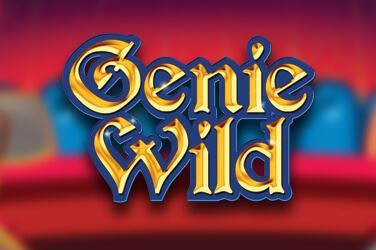 The Genie Wild slot game was devised by the excellent team at NextGen Gaming. They introduced the slot to the market way back in April 2013 so it has been around for quite some time, but remains a leading title.

The immediate thing to notice when you open up this slot is the striking graphics which standout because the interface is very simple to navigate. A jazzy Eastern tune accompanies the slot which can be accessed on a desktop, mobile or tablet devices.

Genie Wild is set in an Arabian tent which stands out behind the reels, and as such there is a strong ancient Arabian blend to the game. It brings the ancient world to life mixed with a touch of Aladdin! This is nothing new with slot games. You’ll have seen it in many other titles. Genie Wild has five reels and contains 25 paylines in total.

There are plenty of icons in play in this game. The lower paying ones are the usual 9, 10, J, Q, K and the A while the better icons include a green gem, an overflowing chest, a monkey and a bowl of fruit. The genie is the Wild as the name of the game suggests while the bottle makes up the Scatter icon.

It would not be a NextGen Gaming offering if there weren’t some features in play! The first one for Genie Wild is the Free Spins feature. You are required to land three bottle Scatter icons across the reels to activate this feature. When the feature starts you get 10 free spins. During the free spins if the genie Wild appears it will turn into an expanding Wild which will open up more winning opportunities. This is not a feature that can be retriggered.

The other feature in Genie Wild is the Gamble feature, a constant among many NextGen games. You’ll probably know how this works by now but if you don’t then each time you get a base game win you can try and double your dosh by hitting the ‘Gamble’ button down in the bottom right corner of the machine. To double your money successfully guess the colour of the next card. To quadruple it choose the suit correctly. Do not guess wrong though else you lose your win.

Genie Wild has a pretty weak RTP rating of just 95.35%. That is well below the average and not in the favour of the player at all.

There is a simple approach to the Genie Wild slot game but in a way that makes it work. The acoustics and the graphics are very good and the machine is very easy to use so if you like a game that has a simplicity to it then Genie Wild could very well be one for you. The free spins feature offers plenty of winning opportunities and if you are brave enough you can increase your wins nicely with the gamble feature. This slot is definitely worth a try.