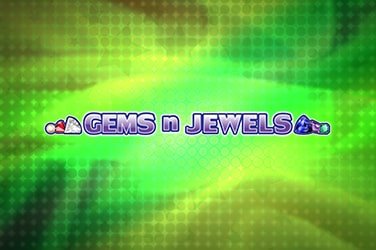 While some games come at you with sweeping narratives and engaging themes, some slots are a little more simple, and that’s no bad thing. Sometimes brightly coloured fun is the order of the day, and players who are used to crushing candy on their mobile devices will love Gems N Jewels, which is all about bringing that compulsive and engaging play to slot games.

But will you grab your share of the shiny mineral goodness, or will you just come up with lumps of coal? Let’s take a look at our Gems N Jewels slot game review.

While Gems N Jewels might not have the most sophisticated theme you’ve ever seen, at least it’s bright and colourful, featuring a neon green background and plenty of brightly coloured gems on the reels. All of the world’s most precious stones are represented, including diamonds and green and blue sapphires, as well as some lesser precious stones like amethyst and sodalite. All of these are rendered in 3D with modern effects so that they shine and sparkle as you play, and while the lower value symbols are the standard 9 – A even these have been given a precious stone makeover. A jazzy, bouncing club soundtrack plays over the top to add to the air of fun, so you could almost forget you’re playing for a fortune!

The Gems N Jewels slot game is a simple slot at heart with a simple layout, with the standard five reels and three rows to play on, though there are also 50 pay lines which is more than you usually get. The maximum bet is slightly lower at £/€/$60 per spin, though that’s not too much of a problem when you see the prizes on offer: 6,000x your bet for five of the diamond wilds, and that’s not just a one-off either, because you can get 2500x for five sapphires and 1500x for five pearls. On top of these high payers, there is also a ruby scatter which pays out regardless of where it lands on the reels, bagging you 150x for five. While no RTP has been released for this slot, it is classed by the developer as low volatility, so you don’t need to worry too much about your hard-earned cash!

And while there’s plenty to be won in the main game you’ll be pleased to hear that the bonuses are a nice little earner as well. While the ruby is the scatter, there is a second scatter in the form of the emerald which is a very generous ticket to free spins as well. Five emeralds grant you an awesome 30 free spins, and with a 3x multiplier on top of that, which makes for some serious win potential without too much effort.

Gems N Jewels is a breeze to play, offering simple gameplay and big prizes in an easy to use package with some fabulous bonuses possible on top. While this might not be a work of art as we’ve come to expect from modern slots, it’s hard to turn your nose up at such great prize potential and such fun and engaging gameplay.