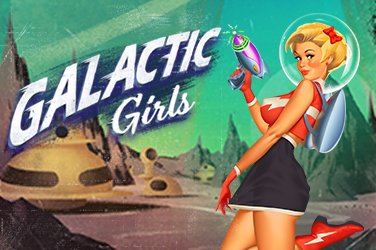 It’s not often you get a chance to indulge yourself in the fantastical world of 1950s pulp science fiction in the slots universe, so Galactic Girls is a rare treat. There are galaxies full of strange new worlds to explore, filled with friendly and not so friendly aliens, mad scientists, sentient robots, bizarre plants and much more besides.

It’s up to some intrepid ladies inappropriately skimpy 1950s attire to sort it all out, and make you a stack of cash in the process. So is this game out of this world, or is it a failure to launch? Let’s take a look in our Galactic Girls slot game review.

Fans of retro comic books and pulp science fiction novels will be in heaven playing this game, which really goes to town with its old school theme and design, utilising all of the iconic art styles of those genres. Rockets with fins, girls in mini-skirts with laser guns, jet packs and plenty of pastel colours abound, really helping to sell the game’s retro feel. There are five space faring girls on the reels who make up the game’s high-value symbols, and while it’s a shame that the low-value symbols are the standard 9 – A, at least these also get a retro space-themed makeover. The backgrounds change depending on which stage of the game you’re in, but they all utilize that same iconic illustrative style of 1950s sci-fi, which will be a nostalgia kick worth playing the game for on its own to some.

The mechanics of this game are slightly odd in a number of ways, firstly just the six rows and five reels which make this slot much taller than most you’ll be used to. Secondly, the game relies heavily on features, in the sense that there aren’t any high-value symbols that don’t have features attached, so you’ll always be enjoying one special bonus or another while you play. This does mean that the low-value symbols play much more of a role than usual, but it’s undeniably fun. The RTP is nice and high at 96.62%, so it clearly doesn’t do your chances of winning any harm!

The bonuses are where the real fun happens in this game, and each of the girls who also act as high-value symbols have a power associated with them that is activated after the free spins round. The scatter in this game is a Star Trek style emblem, and collecting between three and five on the reels activates your 10 free spins. During these spins, there is the potential for any of the girls to appear as stacked symbols, which means there are three of the symbol on the same reel, and once the free spins are over you’ll get a number of bonus games using her power equal to the number of these stacks you landed in the spins.

For example, if you land one stacked Geraldine in the free spins you’ll get to play one spin at her multiplier bonus mini-game, during which you can land up to five stacked Geraldines on the reels for a multiplier of up to 100x on that spin. Each of the girls has their own bonus game, including Substitute, Symbol Replacer Bonus, and the Expanding Reel Bonus, and you can get up to five goes at each depending on how many stacks you landed in the free spins.

With a unique style and theme and some really interesting and fun mechanics, the Galactic Girls slot game is a real breath of fresh air that you’ll find a pleasure to play. We could nitpick and say that the bonuses are a bit confusing to get your head around, but after a few rounds you’ll definitely pick it up.