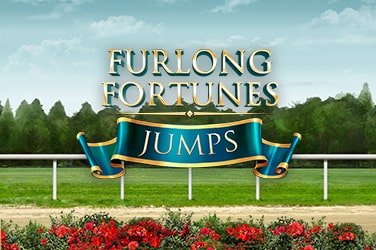 There is no sport in the world nobler than the sport of kings itself, horse racing! What can compare with the excitement of the race, the athleticism of the horses, the skill of the jockeys and the thrill of a flutter on the winner?

The Furlong Fortunes Jumps slot game really leans into the grand, storied history of horse racing in its design, and just about everything is bathed in golden light. The stalls are all polished wood, the sun is in the sky and a gorgeous scene of pretty green trees and perfectly trimmed grass under the course forms the background. A similarly polished wooden frame surrounds the reels, and while the low-value symbols are the generic 9 – A, the higher value symbols are represented by horses ridden by jockeys in a variety of coloured silks. The music behind the slot is also nice and grand, in a sort of military march style, and really helps set the scene for some epic racing.

The slot starts out with a nice little feature that lets you choose one of the horses in the game to ‘bet’ on, and if that horse symbol shows up in two or three wins in a row you can win a jackpot equal to 50x or 100x your stake. You can choose your horse at any time, and it’s a nice little extra that can pay as much as 10,000 coins if you win. Other than this feature, though, this is a fairly standard five-reel and three-row slot game that has 20 pay lines to play on. There is also a wild in the form of a silver horseshoe, while the game’s logo functions as a scatter, and there’s a second scatter in the form of a gold coin which you’ll need to activate the bonus round. The game’s RTP is a healthy 96.48%, though you’ll need to do well in the bonuses to activate all this potential.

The main bonus round in this game is the Race Day bonus, activated by landing six or more gold coins on one spin, which gives you three re-spins. That doesn’t sound like a lot, but you get another three re-spins for each extra gold coin that lands on the reels during the game, while all the gold coins will stick to the reels and pay out the multiplier to your stake that is embossed on it at the end.

Furlong Fortunes Jump is a bit like horse racing itself in that it can be unforgiving at times, going long stretches with only small wins, but all it takes is that one big score to make you rich! Thanks to the favourite horse and Race Day bonuses you’re always just a couple of spins away from the big time, and you’ll have a lot of fun along the way!