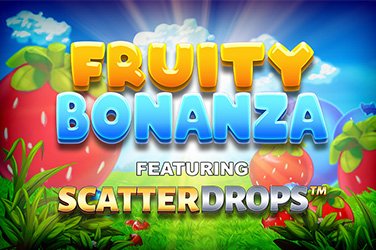 There are times when you need to be calm and collected in slot design, and there are other instances in which you should throw as much as possible at the wall to see what sticks.

The Fruity Bonanza Scatter Drops slot game, in our opinion, falls into the latter of the two categories – and it’s time to find out why.

We open up with the definition of an unconventional layout in the 6×7 format that is presented to us. The scatter pay mechanic is in session for this one, ensuring that punters don’t have to concern themselves with paylines.

There are many themed symbols across the reels as you can probably imagine, including bananas, pears, plums, blueberries, strawberries and so much more.

The return to player (RTP) percentage is a regular feature of many slots out there, and the same can be said for the Fruity Bonanza Scatter Drops slot game – it really is a mouthful, isn’t it?

The RTP here comes in at around 95.97% which is slightly below the industry average with the volatility not really being reported in any extensive detail.

You can put down a nice $€£0.20 minimum stake to get the ball rolling before working up to a conservative high of $€£20. From that point on it’s anyone’s ballgame with potential winnings of $€£250,000 coins. If you’re brave enough, that is.

It feels like we’ve walked into a cross between Tinkerbell’s mind and the racing game from Wreck-It Ralph. The strangest part, though, is that we actually quite enjoy it, with the colour scheme and soundtrack setting the groundwork for some nice visuals.

The aim of the game is to find at least eight matching symbols on the reels, and the kicker is that they don’t actually need to start from the left-hand side.

There isn’t a wild symbol in this one but we aren’t left hanging, as the gold star serves as the scatter.

Any symbol involved in a winning combo will disappear and be replaced by more from above which is known as the cascading reels process.

Then, we have the Free Drops bonus features, which is triggered by landing at least four gold star scatters on the board.

Bonanza Free Drops – ten free ‘drops’ are awarded with two more for every scatter. Plus, every cascade increases the win multiplier by 1x.

Fruity Free Drops – ten free drops are also awarded here with two more for each extra scatter. Also included is a multiplier symbol that applies to all wins.

The Fruity Bonanza Scatter Drops slot game may be a bit too much for some, but the majority out there will likely appreciate just how entertaining and enjoyable the whole process is.

The potential winnings are high, it’s a nice slot to look at and the bonus features are decent. When you add all of that up, you’re left with a solid game.