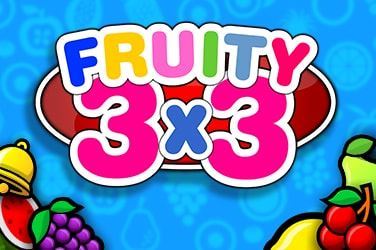 But is this slot all action and no results, or is more really better? Let’s take a look at our Fruity 3×3 slot game review!

One thing we should say about this game is that it’s not big on art and design, and while the fruity symbols are nice the majority of the game is taken up by the reels themselves so there’s not much room for backgrounds or themes. It’s also not the most detailed game, so the fruit symbols are barely more than shapes with a few leaves to show you what they are, but that’s probably a good thing given how many symbols there are on the screen, it’s enough to give you a headache! The usual fruit make up the lower value symbols, while between one and three BAR symbols, bells, stars and various colours of Lucky 7 make up the rest. Luckily there is some soothing music playing as you spin, though the sound of all those reels spinning at once is also not for the faint-hearted.

The layout of Fruity 3×3 slot is quite unusual and may be confusing at first, but if you think of it as just a pile of three-reel, one-row slot games then it becomes much easier to understand. One other mechanic this game makes use of is the gradient of prizes from the top to the bottom reels: The top three games pay the least and only allow up to 8x your stake as a maximum prize, while the bottom three reels all allow symbols worth up to 500x your stake to land. With a maximum bet of £/€/$45 per spin possible, that makes for some pretty decent prizes at the high end, but with a low RTP of 95%, you might find yourself going without the big jackpots for a stretch. You’ll need to win across multiple reels on the Fruity 3×3 slot game to generate those big wins!

Sadly the thrills and spills of playing on so many reels at once don’t leave much room for bonuses and features, and you’ll find that there aren’t any at all in this game. There aren’t even the usual scatters and wilds to help you out, so you’re playing entirely with the basic symbols. This may sound a little bland, but to be honest you’ll have your hands full with all the other reels, so a little less complication may be what you need. Plus, there’s nothing like setting off four or five reels at once for a cascade of wins!

We award Fruity 3×3 maximum points for originality, and while there isn’t much in the way of graphics or good design to speak of, this game is all about those wins that come thick and fast. It can be frustrating waiting for wins at times, but the sheer joy and excitement you get when landing a few big wins at once is hard to beat!