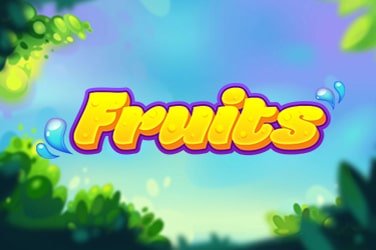 We were a bit surprised to see a game called Fruits come out of developers Nolimit City, who are well known for their detailed and high concept slot games, so a retro re-tread didn’t exactly seem like it was in their remit.

Play the game, however, and you’ll see exactly what they were going for and some of that classic Nolimit City style on display, thanks to some fun and interesting game concepts, great graphics and great prizes. So have these developers smashed it out of the park again, or is this a misstep? Let’s take a look at our Fruits slot game review.

In true Nolimit City style, this slot looks a little out of the ordinary at first glance, and you’ll notice immediately that it’s got a very strange reel alignment, but it’s not a big innovator in terms of the way it looks. The Fruits background is a sunny day glimpsed through a thicket of trees, while the symbols on the reels themselves are all your fruit machine favourites plus a couple of odd ones out: Strawberries and pineapples sit alongside blueberries and dragon fruit, stars and lightning bolts. But would it really by a Nolimit City slot if it wasn’t a bit out of left field? The graphics are stylised and a bit bulbous, making everything look like it’s made out of balloons.

First, the reels: These are arranged a bit like a pyramid on its side, with the first two reels being two symbols high and the next four reels being three symbols high, opening up a potential 116 ways to win. That’s an excellent start for Fruits, and it just keeps getting better. The top bet is £/€/$100, which is a pretty good total considering the number of ways to win, and while the top prize is just 50x your stake for five blackberries you’ll win that much more often that your prize fund will still be healthy. If you’re still not sure, the reassuringly high RTP of 96.23% should put you at ease!

One of the main bonus features in the Fruits slot game is actually a random one that can occur at any time when up to nine symbols can be replaced by mystery symbols that will then all transform into one symbol and generate a big win for the player. There are also two kinds of free spin games on offer, the first of these being offered in the main game when four matching symbols land. These are then frozen in place while the reels spin around them, adding more of the same symbol to the frozen ones until you land no more of them, and your final total is then calculated and awarded as a jackpot.

A second, separate free spins game also plays alongside it, when collecting three lightning bolts allows you to play on the four full-sized reels. Here, every extra lightning bolt adds a cash prize to your total, while the two smaller reels can land modifiers on them such as multipliers and extra spins.

Fruits is a fun and well-designed game, which brings a lot of modern elements to a classic style of slot machine in order to up the fun and prize total while keeping hold of the cool retro elements. The result is a great combination, which marries the great features of one with the style of the other and makes for a much greater whole.