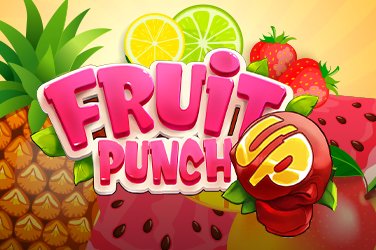 If there was ever any doubt in your mind that slot designers come up with their themes by pulling words out of a hat, then wonder no further: Fruit Punch Up Slot Game is about boxing fruit. They took a pun about fruit punch and ran with it, creating a range of succulent and angry fruits to grace the reels and help win you a pot of cash, but is the game as good as the pun?

Let’s take a look in our Fruit Punch Up slot game review.

We can’t go any further without talking about the bizarre theme, so let’s dive right in. While it might be weird, you can’t take anything away from the effort that G Games have put into this belligerent extravaganza: all the symbols are unique, and from arrogant apples to concerned cherries, they’ve all got their boxing gloves on and they all look in the mood for a brawl. The whole game is brash, loud and colourful, and it somehow works so well that you almost forget what a strange premise this is in the first place. The graphics look really nice too, and while the game feels a little static, the characters are well-drawn and high definition to really help sell the inventive theme.

The Fruit Punch Up slot game is also a bit strange in terms of the mechanics too because this is one of those rare slots with more rows than reels, three versus seven to be precise. There are 10 paylines to use and a lot of different fruit symbols to keep track of, so we’ll keep it simple: The cherries are worth 1x your stake while the boxing gloves are worth 500x, and everything else falls somewhere in between. You’ll need to land as many of those higher value combos as you can because the RTP is a stingy 94%, but luckily there are a couple of bonus games thrown in to spice things up, so that won’t be as hard as it sounds.

The first bonus game is a simple free spins round and is activated by landing three or more golden pears to unlock up to 20 free spins. There are no extra bonuses on top of this game, but it can be re-triggered from within the bonus round an unlimited number of times, so those spins stack nicely. If that’s not enough to get you excited for a royal rumble, there’s a second bonus round on top that can see you land a tasty jackpot: Land three bonus symbols and the jackpot wheel will spin, determining whether or not you’ve won one of five variable jackpots. Juicy!

We have to admit, while Fruit Punch Up Game Review left us a bit mystified with its odd theme, we were sold after we actually played. The excellent art and design used in this game really helped flesh out the theme to the point where we barely noticed how odd it is, while the frenetic action and the high potential jackpots made it worth pushing through to the bonus rounds for a shot at the big time!