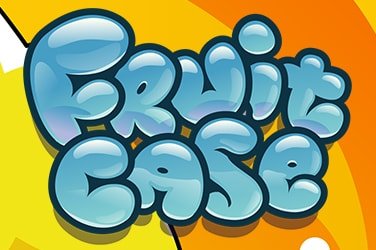 Not all slots have to be works of art or epic stories of adventure and heroism, sometimes it’s ok to pair a fun theme with some interesting mechanics if it makes for an exciting experience, which is exactly what Fruit Case does so well.

This isn’t exactly Tolkien, and all the backstory that you’re given is right there on the screen: You’re turning all these expressive little fruits into jam. It might seem a little cruel, but there’s money to be made, and the fruit doesn’t seem to mind either way. So will this game be a sweet surprise? Let’s find out in our Fruit Case slot game review.

For such a wacky and colourful game Fruit Case has an oddly clinical background, depicting the inside of the factory where you’ll be turning the fruit into jam. Speaking of the fruit those crazy guys are your high-value symbols, though they’re not like any fruit you’re probably used to seeing on slot machines because each one has a weird and outlandish expression on its face. The low-value symbols are represented by jars of jam in different colours, the same as the fruits they’re made from. It’s a zany and exciting slot with plenty of bouncy sound effects and cute animations, though we can’t help but be a little disturbed as those wacky faced fruits are squashed by a metal press whenever you generate a combo!

The major mechanic in this game is the cascading reels system, which removes successful combos from the reels and allows other symbols to fall in their place, potentially generating strings of wins that can go on indefinitely. In Fruit Case you get an extra goodie on top of this because each successful combo in a row after your first will add a multiplier to the next spin with a potential maximum of 8x, meaning you have lots of incentive to get those combos moving! Wilds also come with random multipliers that are added to the value of the combination they help complete, further boosting your wins. No wonder the RTP is above average at 96.4%

The bonuses in the Fruit Case slot game occur mainly in the main feature, so don’t be too disappointed that the bonus round is a simple free spins round. It’s simple but effective, and landing three free spins tokens will grant you ten spins, but one positive is that you can easily re-activate this mode by landing three more bonus symbols.

Though this game has all the appearances of a slot for casual gamers, with a lighthearted theme and a cartoonish style, there are secretly some rather good prizes available in Fruit Case that will be of interest even to high rollers. The combination of the multipliers available in the cascading reels feature, the wild multipliers and the free spins that allow both of these features to come together simultaneously can make for a truly rich slot experience if you can make the most of them all!