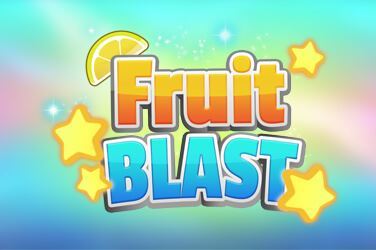 Fruit Blast is a slot and arcade game mix, perfect for those who are bored of the traditional five-reel set-up. The game is themed on cocktail making, meaning players can head over to the beach bar and order a drink with this slot.

This instant win game has no paylines or reels, with a 5X5 grid interface to play from.

The set-up of this game is similar to many mobile games, as it presents a grid filled with different types of fruit. The game involves matching symbols, which then explode awarding a win. When starting the game, the monkey at the top will release fruits on to the game board, with the aim being to burst the fruits. To burst the icons, the symbols have to be aligned three at a time. When the fruits burst, new symbols will fall in the positions left empty by the burst icons. The progress bar at the top will keep you updated as you continue playing the game.

There are 5 main symbols – grapes, lemons, watermelons, pineapples and cherries. The pineapples give the best payout, whilst cherries pay the least. There are also two special symbols which appear on the board, the yellow jackpot symbol and the bonus symbol.

The RTP acronym stands for Return to Player. This describes a game’s expected payback percentage. It means that a game with a higher RTP will give you a greater chance of winning in the long term. The Fruit Blast slot has an RTP between 94.02 and 96.12, with an average of 95%.

The game comes with a wide range of bonus features to add even more excitement. There isn’t a wild symbol present due to the unique set-up of the slot. But the bonus rounds will help you progress through the game. There are eight in total, including Hawaiian Shake, Dance Nights and Pick & Win II.

Presented by the bartender Aloha, Hawaiian Shake can give an instant win of eight times the bet. Pick and Win II allows players to pick multipliers, with the maximum winning feature being 170 times the bet value. The feature Happy Hour grants players one fruit bar filled on the house. Side Dish gives 1 free round with a 10x multiplier and a guaranteed win.

This fresh and unconventional online game is perfect for those looking for something different. The winning combinations are created by the player’s actions, which makes the slot much more skill-based. The beautiful graphics and beach theme make Fruit Blast a great choice for online casino players.