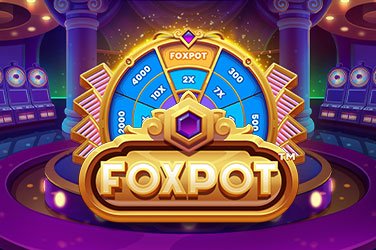 There’s something irresistible about a good old fashioned game show, and whether it’s the flashing lights and tension, the cheesy host or the amazing prizes, there’s something for everyone. It’s that fun and excitement that Foxpot tries to capture in this new slot, welcoming you into an exclusive casino to try a hand at the wheel spinning game that could have you winning big prizes and even bigger multipliers!

So will this game have you jetting off on an exclusive holiday, or will you be going home with a novelty pen? Let’s take a look in our Foxpot review.

Foxpot is one of the few games you’ll find these days where the mechanics are more interesting than the looks. That’s not to say it looks bad, and we enjoyed the slick and colourful design of the game machine and the casino behind it that reminded us of a really high budget TV show. Other game machines flash and spin behind the reels, the chatter and laughter of a casino can be heard and there’s even the excitable voice of a game show host to help narrate the action. All in all, this game does a great job of sucking you in and having you feel like you’re actually playing a high stakes game on TV.

The setup of the gameplay, on the other hand, is quite unusual with just one row and three reels shown towards the bottom of the screen, on which a range of traditional fruity symbols like cherries and watermelons spin. There is a fourth reel, but this is exclusively reserved for multiplier bonus symbols that can be applied to your wins. This is fun to play, but the hit rate isn’t great, and only one in ten spins will result in a win even though the overall RTP is a healthy 96.36%. That’s why you’ll be pleased to find there’s a lot more to this game than meets the eye, with some exciting bonus rounds that just seem to get bigger and bigger.

Getting into the bonuses is all about the prize wheel, which you can access by landing between one and three bonus symbols on the reels. Each bonus symbol corresponds to a ring of the big, colourful wheel above the reels, and if you land all three you’ll be able to play each game starting from the outside ring and moving inwards. These rewards are stackable, so every win you make on each ring is applied to what you won on the ring before. The first ring lets you win one of three bonuses worth up to 1000x your stake, while the second lets you apply a multiplier of up to 10x to that bonus. Finally, the third ring lets you win a re-spin that could see you repeating each ring all over again for yet more cash!

The Foxpot slot game combines classy, well-rendered visuals with a fun and simplistic concept to create an easy-going game that’s both fun and rewarding to play. There’s some extra complexity in the form of the bonuses, where most of the money is to be won, but we think you’ll love the tension of waiting for the arrow to stop!