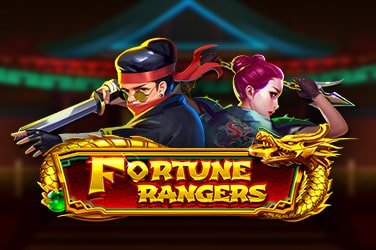 Fortune Rangers is another slot from that rich vein of games themed around China that has been so strong lately, and luckily this one doesn’t require you to have much of a grasp on Chinese culture to understand. Fortune Rangers puts you in the company of two deadly looking Chinese warriors armed with traditional weaponry, and while we don’t understand the Chinese characters used throughout the slot we’re pretty sure they mean business.

So will you help the dynamic duo battle evil and claim the treasure or will your courage fail you? Let’s take a look at our Fortune Rangers slot game review.

In typical Chinese style, this slot is overflowing with red and gold, with a slightly dark background illuminated by the mountains of glowing gold coins piled on the ground and the golden glow of the Imperial pagoda behind the reels lit up by lanterns. The symbols are on the reels and all traditionally Chinese too, with ornate fans, fortune cookies and bundles of coins on the reels as well as a banner covered in Chinese characters and our two heroes in awesome action poses. There are even some suitably bombastic animations, as golden dragons flood the screen during the bonus rounds to really add extra excitement to an already fun game!

There are a few things to get excited about straight off the bat in Fortune Rangers, so we’ll dive right in: This game benefits from 76 pay lines, which is nice and high, especially when you consider that the betting limit is a huge £/€/$200 per spin. It’s also quite a strangely shaped slot that gets bigger as you move to the right, with the first two reels having three rows, the next two having four and the final row having five. This is technically a low volatility slot with a payout of just 800x your stake possible, though that still amounts to as much as £/€/$160,000 so we won’t complain too much! As if all that wasn’t enough, the RTP in this slot is an excellent 96.90%, up there with some of the best!

On top of these excellent mechanics, there are also a couple of bonuses to play with, one of which is activated in the main game. Called lucky wilds, this is a simple game mode that just guarantees to turn between one and five of your reels entirely wild as you play, potentially resulting in massive wins. The second bonus is activated by landing between three and five scatters, granting you up to 16 free spins, as well as the interesting bonus of a linked reel among the four other reels on offer. This makes both reels identical on each spin, making for a much greater chance of stringing together combos.

Fortune Rangers is an exciting and feature-filled game that offers loads of surprises, something we always love in a slot! The art style is great looking thanks to the sumptuous use of reds and golds, while the prizes are excellent to start off with and just keep getting better and better as you land more wilds and bonuses.