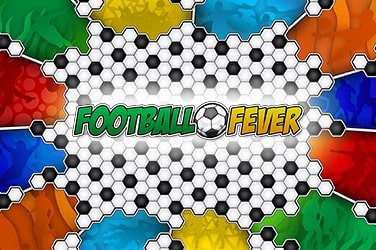 It’s probably not a surprise that slot players are often sports fans, either because they enjoy a flutter at the races or because that mix of adrenaline and nerves as the game plays out is a similar feeling to watching the reels spin.

Whether you’re a football fan or not, Football Fever by Saucify certainly does a good job of capturing all that excitement in slot form. But will you score the winning goal or give away a penalty? Let’s take a look at our Football Fever slot game review.

Football Fever isn’t exactly a subtle looking game, and you might be blinded by all of the colours, but what do you expect from a slot based on the Rainbow Nation? This game was originally designed around the 2010 World Cup in South Africa, which you can tell from the colour scheme and the inclusion of the incredibly annoying vuvuzela, but don’t think there’s anything dated about this slot. With crisp and colourful graphics, cool sound effects and even the shrill referee’s whistle in the background, you’ll almost feel like you’re there on the pitch! All the symbols are unique, and while football paraphernalia like boots and tickets represent the low-value symbol, the high-value symbols are represented by players in action poses.

While the colours in Football Fever might be a bit off the wall, the layout is pretty typical of other slot games, coming with five reels and three rows, though it does boast 243 ways to win. This often means that the prizes are less and the betting limit is low, though you tend to win more frequently, and while that holds true for the low betting limit of £/€/$31.25 the top prizes actually aren’t that bad: 600x your bet for five of the world cup wilds, while the striker nets you 400x. You can even win plenty from the whistle scatters, and five of those beauties will leave you 150x your wager better off, as well as entering you into the bonus game.

There is also a second scatter which isn’t as generous with its payouts, but you only need three yellow card scatters to start one of the bonus rounds, the penalty round. This is a pretty simple game that only requires you to choose a place on the goal to shoot, and each zone you can shoot into has a prize associated with it, which will be revealed when you pick. The whistle scatter is slightly different and grants you 15 free spins as well as the cash prize mentioned earlier, though there are no other bonuses on top of this like multipliers, though everything you win in this game will be automatically tripled so there’s plenty to play for already!

The Football Fever slot game is a really good option for fans of the beautiful game because of its vibrant football theme and its fun game mechanics, though all players will surely enjoy the great combination of free spins and cash prizes in the bonus round. The 243 ways to win mechanics and the decent prizes in the main game are pretty cool too!