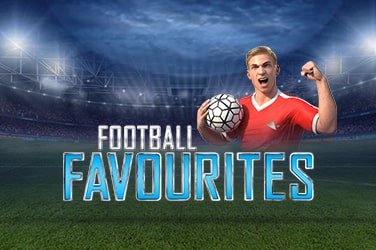 It’s always been a bit of a struggle to capture the magic of football on a slot machine, and while plenty of developers have tried, the results have been mixed to say the least. Football Favourites by Inspired Gaming is another crack at the top spot in the ranking of top football games, and it takes a bit of a different approach that players may enjoy.

On top of that there are some decent prizes on offer to keep your attention, but will you win the cup or is it relegation time? Let’s take a look at our Football Favourites slot game review.

One of the coolest things about this slot is that you get to pick a team to play as before the game starts as if you’re playing FIFA or a management game, which doesn’t make a huge difference to the gameplay but offers a nice little touch. Choose between Tottenham, Liverpool, Chelsea, Madrid, Islington (Arsenal), City, United, or Barcelona, and the kits of the high-value players will change based on your choice. The low-value symbols remain the same, the generic 9 – A, but the background of a huge football stadium and the TV sports-style menus are all atmospheric enough to compensate, along with the sound of fans in the background.

Inspired Gaming counts the Football Favourites slot game as being Medium to High volatility, which means you may have to wait a while to land wins, but they’ll be much bigger than in a lower volatility slot. That’s immediately obvious in this slot, because the payouts in the main game aren’t massive, maxing out at just 25x your stake for the highest paying football shirt icon. It’s also clear in the RTP, which at 95% is a bit below average, though that will improve significantly if you can do well in the bonus rounds. There’s also a high betting limit of £/€/$100 per spin, so it’s not hard to make the most of any wins you do achieve.

While the main game might be a bit disappointing in Football Favourites, there’s nothing to moan about in the bonus rounds, where big multipliers can rack up the cash very quickly! There are a couple of special symbols that appear in the main game, the trophy wild and the bonus football. The wild acts like wilds do in other games, substituting for other symbols to make winning combos, while the bonus footballs all come with a multiplier that is added to your win. Land six of the footballs and you enter the Match Day bonus round, which starts off by adding all your football multipliers together for a nice big win to get you going. Then you’ll watch a little simulated match, during which every goal you score will add 1x to the multiplier won in that game, and if you end up winning the match you’ll even get an awesome 3x multiplier on top!

Football Favourites is really all about the bonus round, and while you can come out ahead in the main game it’s nothing compared with what you can win if you manage to land a nice little streak of bonuses. On top of that, the whole game does a great job of bringing the spirit of football to life, from the ability to choose teams to the atmosphere it creates, so fans will have a lot of fun!