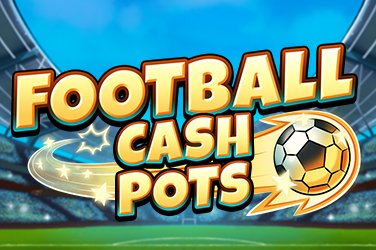 Experience the thrill of competition and the roar of the crowd in this football-themed slot from Inspired Gaming! Football Cash Pots is a bright, colourful and exciting game based on the beautiful game itself, combining all your favourite themes from football with some top prizes that will have you cheering for joy whatever side you support.

But can you beat the keeper and score yourself a sack full of cash, or will you be sent off? Let’s find out in our Football Cash Pots slot game review!

Some sports-themed slots are heavily branded and corporate, but Football Cash Pots prefers to keep things light and casual, featuring cartoonishly designed symbols and bright colours rather than logos and player headshots. That’s not to say this game is basic though because there are also sound effects and animations as well as the background noise of a packed stadium crowd to set the scene. While the low-value symbols are the generic 9 – A, the high-value symbols are represented by all kinds of footballing paraphernalia, including Footballs, the ref’s whistle, stadia, football boots, trophies and a winner’s medal. The background to this slot is of a full stadium seen from the pitch, so you’ll really feel like you’re part of the action.

The strategy on the pitch is pretty straightforward, with players given five reels and three rows to play on alongside ten pay lines. The maximum bet is slightly on the low side at £/€/$60 per spin, but with top prizes of 2000x your stake for five of the game’s logo there’s still plenty to play for, and it’s no wonder that the Football Cash Pots slot game has an above-average RTP of 96.5%! That’s a pretty good payout for any game, but with a Cash Collector bonus to look forward to on top of that, this game has the potential to make you very rich!

Landing the Cash Collector bonus is slightly trickier than you might usually find it because you have to land six football symbols across the reels, but it’s well worth the effort considering the prizes available. Acting like a normal free spins, or re-spins, round, Cash Collector challenges you to land as many football symbols as you can on the reels in your five spins. Each football symbol that lands add to your prize fund at the end, while each football goal you land on the reels will turn all of the symbols currently on the reels into gold. Once your spins are complete the game will add up the number of goals you landed and apply that number as a multiplier to what you won, with a maximum of 5x your winnings. This can turn a decent chance into a really great chance of landing a big win!

Football Cash Pots is a fun little tribute to the beautiful game that also manages to pack in a great Cash Collector bonus round at the end, giving you the chance to bag some excellent multipliers. But that’s not all! You can also win handsomely in the main game, so it’s not all staked on the bonuses unlike other games on the market.