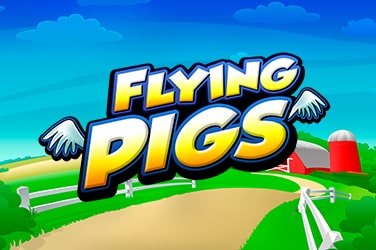 Flying Pigs might not be the most auspicious title for a slot game, but don’t worry, because winning in this game is far more likely than that! This game is a bingo-style title more than a traditional slot, but that doesn’t mean it’s completely straightforward: There are a few modifications made in order to spice the game up!

Whether you’re a bingo pro or a first-timer, there’s something for everyone in this easy-playing, big winning game. So will pigs fly, or are you grounded? Let’s take a look in our Flying Pigs slot game review.

The game starts off by setting the scene in a farmyard populated by intrepid, daredevil pigs, though it’s a pretty low key theme that doesn’t play much of a part in the rest of the game. The screen where you’ll spend most of the time is simplistic and cartoonish, with a farm scene in the background and a mask-wearing pig with wings at the top of the screen, but the majority of the action takes place below. Here you can see four bingo cards covered in numbers, while the bingo balls sit in a diamond in the middle of the table. The paytable takes up the top of the screen, showing you the winning combinations. It’s all very utilitarian, but it does the job of communicating what you need to know.

If you know nothing at all about bingo, here’s a quick crash course: The bingo balls are drawn randomly, and if the numbers on them happen to match the numbers on your cards then you can win prizes. Depending on the style of bingo you may get prizes for completing certain lines or patterns on your card, and for filling your card completely, but in this version, you can choose to play four cards simultaneously to boost your odds. Each ‘spin’ ends when all the numbers have fallen into the ball area on the screen and marked off on your cards, and you’ll be rewarded for all the patterns you managed to complete. You can then choose to spin again with the same cards, or swap for different ones.

You can find the patterns you’ll need to complete at the top of the screen, and this is where the real money on this game is to be found. The simplistic wins like straight lines pay only 3x your stake, while the complicated ones like full cards pay as much as 1500x the stake. You’ll need as many as possible of these because the RTP of 93.73% is pretty stingy. The game really is that simple, and that’s about it for features in the main game.

While there are no free spins to speak of in this game, there is a nice little extra that happens when you land a square or rails pattern on the cards, which is a little pick and win game involving pigs. You need to Grab as many pigs as you can and drag them from one side of a fence to the other, collecting prizes as you do so, but when you click to reveal a wild boar the game is over. If you come up short in the main game, you can also buy extra balls to try and complete that one last square you need to win a prize!

You probably already have an opinion on bingo-style games, which will determine whether or not you will enjoy this slot, but the Flying Pigs slot game is a slick and well-executed version of this format. The graphics are sharp and fun, the mechanics work well and there are some good options to fiddle with to help you win.