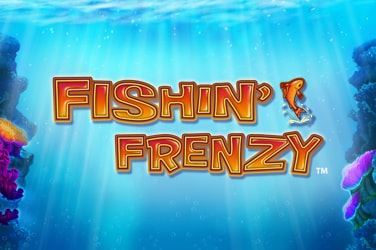 For all you budding anglers out there looking for a fishy themed slots game, then you are in luck, as Blueprint games have designed the perfect game for you. Fishin Frenzy has an underwater setting and comes with plenty of multipliers, free spins and bonus features as well as a Return to Player ratio of 95%, which comes well within the industry average of between 94 and 96%.

Visually the game developers have opted for a cartoon feel to the game with a background landscape depicting a deep underwater trench below a bright blue sky. The sound effects in game add to this setting with an uplifting jingle as the reel spins and when paylines are created.

The in-game symbols include the A to 10 card range as the lowest symbols in the game, for higher pay-outs you should look out for the life ring, tackle box and the fishing rod. Apart from that there are big and small fish symbols to help you score combinations as well as the seabird, bluefish and boat symbol; more about them later. All of the symbols reinforce a nautical theme including even the A to 10 cards with flicks shaped like a fish’s tail amongst other nice features. The highest value base symbol is that of the seabird which offers a sensational 2000x your stake for five or more.

Fishin Frenzy works off a 5×3 reel layout and provides up to 10 paylines, if you are looking to spend less money the option is available to reduce the paylines down to 1. The game is perfect for those who are playing to a budget with a minimum bet per line coming in at just £/$/€00.02, this means even with the maximum number of paylines set at 10; the total cost per spin is just £/$/€00.20. The volatility of Fishin Frenzy is described as medium which means the chances of winning are straight down the middle between frequent low wins and infrequent high wins available. A player can expect to get fairly often medium sized wins in this game, it would be advised for players who don’t like big risks and are willing to spend time and money for the large multipliers.

With the ability to use 10 paylines the Fishin Frenzy reel does not use a cascading feature so that once the reel has stopped spinning and the paylines calculated that is it. Sometimes this can be quite boring in comparison as the cascading reel can lead to more and more wins however on Fishin Frenzy the satisfaction of numerous paylines from a single spin is just as good.

As well as the ability to adjust your bets, Fishin Frenzy also includes helpful features such as the auto play feature to save the player constantly re-spinning; this will also stop spins when a winning line appears until the winnings are counted. Another in game feature that aids the experience of players is the ‘?’ symbol in the top-right hand corner of the screen, this will provide information on pay-outs and conditions of the game.

For the more serious gambler, Fishin Frenzy will allow you a maximum bet of $/€/£40 per line, which equates to $/€/£400 per spin should you choose to select the maximum 10 paylines. The most you can win on the base game is 2000x your stake, you can however hit big with a 5000x win via the free spins round on the main feature round. Therefore, if you have staked the max of $/€/£40 per line, you could potentially win a staggering $/€/£200,000 jackpot!

The Fishin Frenzy wild symbol is the bluefish, and this will replace all other symbols with the exception of scatter symbols, which in this game is represented by the fisherman. There is an added bonus too because if you land five wilds in succession, you will receive an instant prize of 200 times your initial stake.

When it comes to landing the free play bonus, you will need to have a minimum of three scatter symbols; in this case represented by the boat symbol with the words scatter. When you do you will receive a generous 10 spins for 3 scatters, 15 for 4 and 20 for 5. As mentioned above, the best part of the free spins feature is the chance to land the jackpot of 5,000x your stake; but to achieve this you will need to land five fisherman symbols in a row.

Fans of Fishing Frenzy can enjoy the slot any time, any day as they will be pleased to know it is compatible on mobile and tablet devices with an internet connection. As it is accessed through websites rather than an app the operating system is irrelevant, however for the best experience we would recommend IOS or Android devices. Except for the smaller screen size, the gameplay doesn’t differ that much from desktop play.

We found Fishin frenzy to be both an enjoyable and rewarding game with an interesting if not somewhat childish design. However, features like the colours and sound effects only add to the fun that can be had alongside the possibility of big wins, with multipliers offering up to 5,000x wins.

Fishing Frenzy is available to play now on Casino77, and if you want to add more, including an extra reel to the classic game, take a look at Fishin Frenzy Megaways, also on Casino 77.