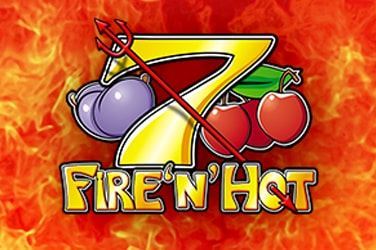 Brought to you by Tom Horn Gaming, the Fire ‘n’ Hot Slot Game is a fruit slot with a couple of surprise twists. The five-reel, three-row design has just five paylines but packs plenty of extra features for sizzling rewards. The design is fully-optimised, so you’ll find it’s compatible with all of your devices, including those with touchscreen functionality.

With a Return to Player (RTP) of 95.74%, the Fire ‘n’ Hot Slot Game is considered a medium volatility slot. Expect frequent wins of decent amounts.

As the name suggests, you’ll find lots of fire in this slot. The reels are engulfed in a fiery, flame-filled background, though if you look closely, you’ll notice some scorched fruit symbols along the bottom of the screen. Arrows and the devil’s fork frame the reels, creating a hellish atmosphere.

Symbols include familiar fruit machine symbols, including colourful cherries, grapes, oranges, watermelons and plums. There’s also a red lucky number seven symbol, plus a golden version that is clearly labelled as the wild within the game. This wild can substitute for all other symbols within the slot, helping you create winning combinations more frequently. The only symbol it can’t stand in for is the scatter – golden stars represent the Fire ‘n’ Hot Slot Game scatters.

The Fire ‘n’ Hot Slot Games minimum bet is just $/€/£00.10 per line, whilst the highest bet is restricted to a low $/€/£10.00 per spin. High-rollers will likely avoid this slot due to the relatively low maximum stake option.

Unfortunately, you won’t find any free spins during the Fire ‘n’ Hot Slot Game. However, there is a fantastic bonus game known as the magic numbers round. To trigger it, you’ll need to land three or more golden start scatters in any position across the reels. Each star is concealing one of the game’s symbols – players need to choose a star and click to reveal the hidden icon. Once it’s revealed, all other golden stars will transform into the revealed symbol and burst into flames, leaving behind a win worth the highest possible payout for that combination of symbols.

To gamble or not to gamble…

If you’re not satisfied with your prize pot after any winning spin, you have the chance to activate the gamble feature by selecting the corresponding button beneath the reels. You’ll need to guess the next playing card’s colour in the sequence to double your win. Use this feature at your own risk – if you assume incorrectly, you’ll lose your original winnings.

The Fire ‘n’ Hot Slot Game has some impressive graphics and the background design, in particular, is very realistic. The accompanying soundtrack adds excitement to the gameplay, and the motions and animations are incredibly smooth. We’re a little disappointed that there aren’t more unique features. However, if you’re a fan of the classic fruit machine gaming engine but want something a little different, this is the game for you.