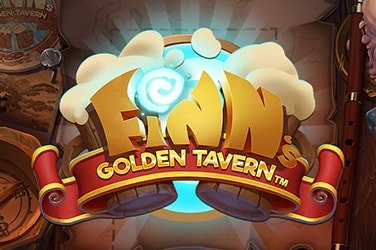 Finn’s Golden Tavern sees the return of lucky leprechaun Finn, star of another NetEnt game Finn and the Swirly Spin, this time as the eponymous publican of the Golden Tavern and back to help you get rich.

Finn’s famous swirly spins also make a return, which will please fans of the original popular game, but the prizes have received a noticeable upgrade and some of the more complicated mechanics of the original have been toned down or removed.

So will this slots sequel have you enjoying the luck of the Irish, or will you be tossed out at closing time? Let’s take a look!

This game operates on a 5×5 grid, incorporating the famous swirly mechanic that made the original famous. If you’re not familiar with this mechanism, the aim of the game is to move the glowing chest from its starting position in the bottom left to the centre of the screen. This is achieved by blowing up the other blocks by matching rows of three symbols horizontally or vertically, moving them out of the way and allowing the chest to progress round the spiral.

The minimum bet here is 10p while the maximum is $/€/£500, with a maximum possible win of 1,000 times your original stake. The RTP percentage is a respectable 96.1%, though some casinos pay out much lower so it’s best to check. You can play this game right here at Casino77!

The Irish Tavern theme is a pleasing evolution of Finn’s original adventure, and the cartoonish style of the various drinking vessels you’re trying to match looks good, with each one broken representing a certain percentage of your original stake. The gold coins make a return as higher value symbols, as does the mysterious gold star with an eye patch which acts as a wild.

There are still a couple of interesting mechanics remaining, however. Random events wise, occasionally Finn will intervene with a Fist Slam on a losing spin which moves a coin into a winning position, allowing you to continue. You may also find that the chest works its magic on your behalf too, turning mundane symbols into high-value coins as it passes them.

Get the chest into the centre on one spin and you enter the free spin bonus round, which not only gives you the chance to increase your win multiplier with wilds but will also grant you access to a second bonus round should your chest reach the middle again within your five spins. This time randomised coins will be added to the grid, followed by an avalanche of symbols that will continue to make more matches until no possible moves are left – bagging you even more cash.

In comparison to its predecessor and other rivals, this game is noticeably light on extra bonus features and is notorious for its low volatility. That can be regarded as a positive if you’re new to slots or you’re an occasional player, but that and the relatively low maximum jackpot might put off hardcore gamers.