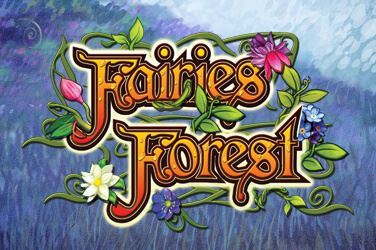 The Fairies Forest slot game is another on the market from the people at NextGen Gaming. The actual release date is unknown but it isn’t one of those more modern creations.

The reels are set in front of a background of the forest and beyond that there is a wonderfully designed landscape. A fun soundtrack compliments the action in the game nicely. The slot is very easy to navigate with all the key facets clearly identifiable. Fairies Forest can be played across all desktop, mobile and tablet devices.

The delightful world of the enchanted forest is the setting for this game. There is a mixture of fantasy and beauty about the game. Fairies Forest is a video slot which has five reels and as many as 25 paylines.

There are quite a few icons in play in the Fairies Forest slot game. The lower paying ones are the typical, traditional card symbols – 9, 10, J, Q, K and A, while the better-paying ones include a crystal ball, a colourful bird, purple mushrooms and different coloured flowers. The fairy with green hair acts as the Wild icon while the lake with the reflection of the forest in it is the Scatter in this game.

The Fairies Forest slot game isn’t blessed with a huge amount of features but one thing which can make up for that is when one of the few features there are is a Free Spins one. That is the case with this NextGen creation. To activate this feature you are looking for three or more of the Scatter icon to land across the reels. This rewards you with 10 free spins. There is no multiplier in play but keep an eye on the expanded fairy. Each time the fairy shows up and expands all wins she is a part of will come with a 3x multiplier. The other good thing about this feature is that it can be retriggered should more Scatters land during the free spins.

The only other feature in the Fairies Forest slot game is the Gamble Feature. This feature is a trend of NextGen Gaming slots and gives you the chance to risk a base game win and either double it or quadruple it. To double it you need to guess the colour of an unturned playing card and to quadruple it you need to successfully identify the suit of it. Be careful though as if you are wrong you lose your initial win. You can win up to five times in this feature.

The RTP rating for the Fairies Forest slot game is 95.34% which is very much below the average for this sort of game, one which is on the side of the house rather than the player.

Fairies Forest is a pretty ordinary slot that isn’t blessed with massive features, but if you are looking for a simple slot that looks good and sounds good then you could do a lot worse than this one. You’ll find more exciting and compelling slots elsewhere, but for what it is there isn’t too much that is wrong with this machine.