Home » Playngo » Eye of the Kraken

Eye of the Kraken Game Review 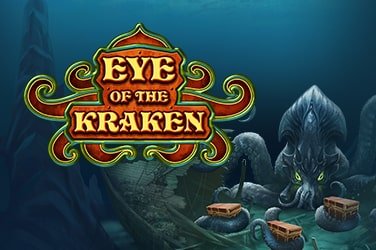 Shiver me timbers and splice the mainbrace, because in this slot you’ll be journeying to the briny deep in search of a monster. Eye of the Kraken is an eerie, atmospheric slot in which tentacled danger is lurking around every corner, and one wrong move can see you whisked off to your doom in the beak of an enormous squid!

Can you keep your nerve and survive long enough to make off with this beast’s booty, or will you spend eternity in the locker? Let’s take a look at our Eye of the Kraken slot game review.

Looking a lot like a 19th-century adventure novel about voyages under the sea, Eye of the Kraken does a great job setting the scene, with a dark and murky undersea world lurking behind the reels and the symbols themselves contained within a sort of steampunk submarine. All the technology in this slot is made of shiny brass, and you’ll need to use everything at your disposal from weighted boots to compasses, oxygen tanks and harpoons to complete your mission. These make up the low-value symbols, while your seafaring friends the captain, first mate and the engineer make up the higher value symbols. Cool animations representing the squid attacks as well as a menacing orchestral score really amp up the tension and make you feel like you’re in a battle for survival!

Unusually for a modern slot, there are only three reels and three rows, with eight pay lines to play on, though the betting limit is still pretty high at £/€/$100 per spin which works out quite nicely when you can land a prize of 1000x your stake for collecting three captain symbols in a row. Ultimately it means you can land high-value prizes more easily in Eye of the Kraken because you only have to collect three, which is fine in our book! The result of this is a slot with a nice high RTP of 96.41%, meaning you’ll stand to win pretty frequently.

The Eye of the Kraken slot game packs a couple of bonuses in with its deep-sea adventure too, the first is actually randomly activated during the main game and causes the Kraken to grab the reels with its tentacles, turning whichever symbols it grabs hold of wild. Landing five diving helmet scatters on the reels activates a second bonus in which two extra wild symbols are added to the reels for nine free spins, offering random prizes and more frequent wins. Finally, the third bonus round is activated by collecting 50 torpedo symbols on the reels in the main game. Once you’ve reached that number you’ll be taken below the waves to face the Kraken, sitting on its treasure in the hull of a wreck, and asked to pick from seven treasure chests in its tentacles. Choose three and enjoy the random prizes within!

Eye of the Kraken really runs with its exciting adventure theme, making this a fun and great looking little slot that also manages to package some big wins in there along the way. It’s hard not to get excited by a good old fashioned adventure on the ocean waves, and the excellent presentation and high-value prizes you get in this game are just the cherry on top!