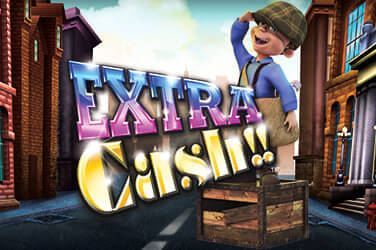 The Extra Cash slot game is one of the many great games that was created by the team at NextGen Gaming. These regular contributors to the market have delivered on a very appealing animated offering here.

The immediate thing that strikes you when you open up this game is the wonderful graphics with striking reels set in front of the big city. Extra Cash is a slot that can be enjoyed on all desktop, mobile and tablet devices.

Remember the days when you took on a paper round to earn a bit of extra cash as a youngster? Those days are revisited with the Extra Cash slot, as the aim is to guide the paperboy through the city on this video slot where there are five reels and as many as 50 paylines.

There are plenty of symbols on show in this game. The lower paying ones are the typical playing card icons 10, J, Q, K and A while the higher paying ones fit in with the theme of the game. They are a kiosk, a red cart, a stack of newspapers, a newspaper van and a dog. The newspaper headline is the Wild icon with the Scatter a printer looking symbol.

There are a few features which make up the Extra Cash slot game. The first of those is the Extra Wild where the paperboy will now and again throw an extra wild onto either reels two, three or four during the base game.

All decent slot games have a re-spin feature and Extra Cash is no different. Should you land either two, three or four of the Scatters in the regular game you will launch the feature. Any reels with Scatters on them are held with the others getting re-spun to hopefully deliver more wins. If you land enough Scatters while on the re-spin feature you will be rewarded further. Three Scatters brings 8 free spins, with 12 the reward for four icons. If you get five Scatters you will receive 20 free spins.

There is also a gamble feature in the Extra Cash slot game. If you activate this feature you can double your win if you correctly guess the colour of a playing card or quadruple it if you pick the right suit. You can win five times in a row before this feature ends.

Extra Cash comes with an RTP rating of 95.23% which is comfortably below the average, something that goes against the player.

There is a lot to like about the Extra Cash slot game, not least the entertaining and engaging theme and the appealing graphics and soundtrack. There are a number of ways to win through the different features that are built into the game so this really is one of the better slot games on the market at present. If you are someone who likes to be engaged while getting your slot fix then make sure the Extra Cash slot is high on your list of games to play!