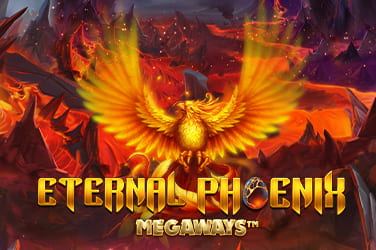 Eternal Phoenix Megaways Slot Game is a top title from Blueprint Gaming available to play at Casino77 and one that features a number of exceptional special Bonuses, including win multipliers, free spins and a ‘Power Play’ feature!

The visuals found during this Eternal Phoenix Megaways Review will provide Casino77 players with an exceptional experience as they are amongst the very best that can be found in any game.

The game will provide a fiery background as hot molten lava can be seen bubbling away behind the playing grid, which may be a little odd when thinking about the mythical bird that the game is set on. Nonetheless, it is incredibly effective and enhances the overall gameplay.

In regards to gameplay, a traditional Megaways playing grid has been provided as there is a total of 6 reels and the potential of between 2 and 7 different rows appearing on each reel with each spin that is made. As a result, a total of 117,649 different paylines are available to form a winning sequence. A minimum bet of $/€/£0.10 is required to play this game, although a maximum bet of $/€/£10 is also possible.

Throughout the duration of this Eternal Phoenix Megaways Review, it was clear that Blueprint Gaming had worked hard on providing players with some of the best symbol drawings that they could, with each of them enhancing the experience provided when they land.

The paytable of this game features the standard royal playing card icons, which are then followed by three different glowing patterns. The highest paying icon available in this game is the Phoenix, whilst there is a wild available in the game that will only appear in the top row and can substitute for all regular icons to help form additional wins.

A host of different Eternal Phoenix Megaways Bonuses are available in this slot game, with the ‘Power Play’ function being just one of those that is triggerable. Players can use this to increase the bet that they place and in return will see the winning conditions be enhanced in their favour.

Additional Eternal Phoenix Megaways bonus features also exist within this game, including the traditional cascades that can be found when a winning sequence is formed, with those icons disappearing and making way for new icons. Mystery symbols are also possible in this game and they appear as if they are phoenix eggs that have been opened. Each of these when they appear will transform into the same random regular pay symbol.

Players who are able to land three or more of the scatter icons will trigger one of the main Eternal Phoenix Megaways bonuses: the free spins round. Landing a minimum of three will see 8 free spins awarded, whilst each additional scatter will provide a further five. Furthermore, players are given the opportunity to gamble the free spins they have to try and win up to 30 on a prize wheel, however, a losing outcome could see all of them be lost.

During this Eternal Phoenix Megaways Bonus, there is an unlimited win multiplier, with it increasing by +1 with each cascade that happens, with no limit on how high it can go. Moreover, additional scatters will also be available which will then provide more free spins when three or more appear.

This Eternal Phoenix Megaways Review found that the return to player (RTP) rate for this slot is 95.5%, whilst Blueprint Gaming has provided it with a medium to high volatility rate.

Should you be able to activate them, then you could be enjoying a rather lucrative experience!