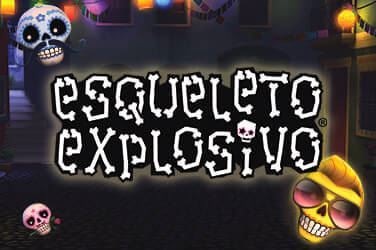 The Esqueleto Explosivo slot game is brought to us by the heavily underrated team at Thunderkick. It came into the market in 2014 but still has a lot of the trends that modern machines have which is good.

Esqueleto Exploviso has a wonderfully designed background and the colours that are such a huge part of the game are really appealing. There is a catchy soundtrack as well and this slot is available to be played across all desktop, mobile and tablet devices.

We are given the opportunity to celebrate the Mexican Day of the Dead in this quite amazing Esqueleto Explosivo game. Esqueleto Explosivo literally translates into explosive skeleton and that is certainly picked up on and used well by the Thunderkick team. The slot has five reels and as many as 17 paylines.

There are so many things that are different to the norm about this game and one of them is the content of the reels. We are used to seeing traditional icons being used but that isn’t the case here. Instead, it is skulls which are coloured differently. There are blue, light blue, green, pink and yellow ones. The Wild symbol is the yellow skull which is wearing sunglasses.

There are a couple of bonus features in the Esqueleto Explosivo slot game. The first of those are what is titled ‘Dropping Symbols’ but really it is similar to a lot of the cascading symbols we see in other games. Whenever you land a win in this game those icons explode and more icons are dropped into those positions in the reels. That could create the opportunity for more than one win which is very welcome. If that isn’t enough then each win increases the multiplier so the first win is 1x, the second 2x, the third 4x and so on so the more wins you get the bigger your payout will be.

The other feature is the Explosivo Wild one. This involves that yellow icon with the sunglasses, which doesn’t just substitute for all the other icons but it will actually explode the eight icons next to where it appears. This will then see new icons dropped into the reels and the multipliers increase as they do in the feature described above, again possibly producing tidy wins.

The Esqueleto Explosivo comes with an RTP rating of 96.00% which is ever so slightly below the average these days. It is more on the side of the house but not by much.

If you like your slot games to come with a complete difference to anything else you will really enjoy this Esqueleto Explosivo game. The different symbols on the reels are enticing and the fantastic design, great graphics and really catchy Mexican songs all enhance the game massively. The features can lead to some nice wins without the variance of the game being too high. When you see them deliver games like this you will see why Thunderkick are such underrated game providers. This slot comes very highly recommended.