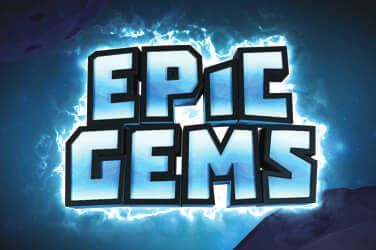 Epic Gems Slot Game is simple yet a fun-fledged game, abundant with colourful tiles. The punters could see glistening gems all over the game with few menacing mines. Epic Gems Slot Game is not a usual reel slot game, instead it comes with eight columns of symbols , several bonus features and much more.

Finding 36 mine free gems must be the winning strategy of the punters. The moment a punter lands on any of the mines, the game and the prize would end there itself. Therefore, the punters shouldn’t end up on the mines at any cost. In all, there are 40 gems out of which 4 cover the hidden mines and should be avoided to earn the victory in the game. The punters are expected to start the game by setting a betting figure which will be instrumental in deciding the jackpot figure. A random number generator decides whether a gem has a hidden mine attached to it or not.

The game can be played for a minimum of £/$/€1 with an option of maximising it till £/$/€10 per game. Average payout could not be determined for this game as it is directly determined by the selection made by the punters. In the game, two kinds of gems are present; one which rolls and disappears into the swirling cortex called the good gem and another one which will have menacing mines attached to it a.k.a. the bad gem. The winning percentage increases with the increase in the number of good gems collected.

Punters get huge benefits through various features provided by Epic Gems Slot Game. The bonus feature gets availed, as soon as the punters put together seven games in succession without landing on the mines. As soon as the bonus feature activates, the winning amount can be directly doubled.

The jackpot prize is awarded once the punter determines the right number of gems required to reach a specific jackpot, which may not always be equal to the total number of mine free gems present in the game.

Taking the nature of the game into consideration, determining the average return to player could be a bit difficult as it completely depends on the punter’s selection.

Epic Gems Slot Game has a lot to offer to the players be it an exciting theme or amazing bonus feature. The game is open for access to all electronic devices and restores data in case of interruption. In all, the game has got your back to kick start your journey into the slot game.