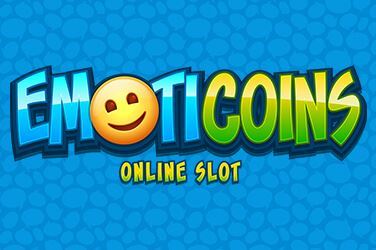 Love them or hate them, there’s no doubt that emoticons have taken the world by storm, and that the world is flooded with smiley faces, winky faces, hearts and many more! While you might associate those little yellow guys more with Facebook chats than with making cash, Emoticoins aims to blend the two and make you cash to go along with your heart eyes or your praying emoji.

But is this slot going to give you dollar signs for eyes, or is it going to make you have an angry face? Let’s take a look in our Emoticoins slot game review.

It goes without saying that this whole slot is themed strongly around the little emoticon faces, so you shouldn’t be surprised to see them showing up everywhere in Emoticoins. Sadly the rest of the lower value symbols are just the generic 9 – A symbols, jazzed up a little to match the theme, while the background is a strange wallpaper of blue speech bubbles that jazzes up the reels and creates an interesting pattern. The high-value symbols are where the emoticons come in, looking like a rogue’s gallery of the more popular icons, including sunglasses, winking, smiling and whistling emojis.

There are also happy sound effects to accompany spins and wins on the reels, which add to the carefree vibes this game gives off, while the emoticons perform their actions in little animations when you make combos with them.

One of the main appeals of Emoticons, in general, is how easy to use and simple they are, and the Emoticoins slot game follows that same path, utilising a quick and easy five-reel and three-row format with 30 pay lines to play on. There are a couple of features in the main game that are above and beyond just the simple symbol matching, though, such as Wild Blast which adds up to five extra wilds to the screen at random after a spin. Don’t be fooled into thinking that this game is for low rollers just because it’s bright and happy, because you can bet as much as £/$/€1500 on a single spin, and with an RTP of 96% it’s not too stingy on the payouts either. As well as these random bonuses, there is also a formal bonus round featuring free spins that you can enjoy, just by landing three or more LOL scatters.

Landing the LOL scatters grants you 10 free spins as well as a cash prize, and during the free spins round you’ll find that any and all wilds that you land will be sticky and remain in place for the duration of the spins. If you’re lucky by the end of the spins you’ll find that you have mostly wilds on the screen, and you’ll trigger an animation of a shower of coins, which is a nice touch.

Emoticoins slot isn’t for everybody, and some people will be turned off by the very sight of those yellow smiley faces. There are some great prizes to be had even though it’s a pretty simple affair, and the addition of a generous free spins round only makes this game more fun!