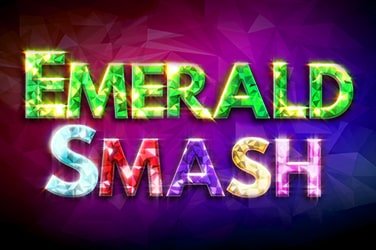 Emerald Smash is a slot game from Inspired Gaming, with an interesting take on the standard fruit theme seen in many slot games.

The game has five reels and 30 paylines in play, with players getting a feel of the classic arcade slot games from the way this game has been designed. The visuals are therefore largely simple, with an alarm bell ringing and special visuals coming on the screen if you manage to land a win. This is the only bit of flamboyance in terms of this game’s visuals, while its simplicity should be attractive to those who are fans of the classic arcade slot games.

Players will pick up wins for landing at least three matching symbols on a payline, while the betting range for the game is from $/€/£0.30 to $/€/£90 per spin.

As mentioned earlier, the symbols in this game are based on the classic fruit slot arcade games, so we see cherries, grapes, oranges, strawberries, peaches and watermelons on the reels, but these are all in the form of jewels rather than fruits. You will also see stars, four-leaf clovers, and lucky sevens on the reels. The Lucky 7 is the only symbol which pays out a win for just two icons in combination as well.

The Emerald Smash bonus feature sees all emeralds in winning lines turn into matching symbols – this could see them all become the most valuable symbol, delivering a huge win in the process, or transform into the lowest-paying symbol – it is random and therefore depends on the player’s luck.

This is a medium volatility game with an RTP of 96.5%

Emerald Smash is a pretty basic video slot game, in terms of bonuses and features. The graphics are interesting and offer a different take on the standard fruit slot games, while the simplicity of this game will definitely be attractive to fans of classic arcade slot games.