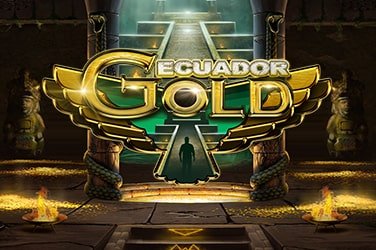 Aside from the bottom of the sea and outer space, the jungles of Central America are some of the most mysterious and least explored places on earth, which is perhaps what makes them such an attractive theme for slot makers.

Ecuador Gold places you in the shoes of an explorer on the lookout for ancient ruins and ancient treasure, challenging you to dodge the natural hazards, traps and wild animals in order to make off with the riches of the ancients. But can you keep safe on this adventure of a lifetime or will you stay in the jungle forever? Let’s take a look at our Ecuador Gold slot game review.

The jungles of Central and South America have been home to many civilizations over the years: The Maya, Toltecs and Olmecs to name a few, and it’s in one of their ruined cities your adventure takes place. Two mighty pillars stand on either side of the reels covered in Amerindian carvings, while the background of the reels is a gloomy and vine strewn stone temple, also covered with carvings and jewels. The symbols on the reels are similarly themed around native culture, featuring a variety of culturally inspired icons such as Jaguar heads, snakes, lizards, birds and sun symbols. In terms of higher value symbols, there are native masks, temple symbols and the face of the intrepid explorer. A calming soundtrack inspired by Amerindian music plays in the background, while vivid animations accompany the action.

The Ecuador Gold slot game is all about the ways to win, and it’s up to you to advance up the great pyramid to land some of the amazing prizes at the top. This game uses the cascading reels mechanic, removing winning combinations to allow more symbols to drop in from above and generate more combinations. The fun doesn’t stop there though, because each successful spin causes the reels to expand and bring in more ways to win, the camera panning out to reveal more reels that can add up to an amazing 262,114 ways to win from your starting position of 4096 ways. There are also increasingly large symbols to play with, with any image able to appear up to 4×4 in size. All in all it’s a very generous system to play, which is probably why the RTP is slightly above average at 96.1%

These mechanics offer plenty of fun and excitement, so the fact that there is also a bonus game on top is great for slot fans. Landing six of the sun scatter symbols will result in 25 free spins, during which time your pay lines won’t reset even if you land a losing spin, so you’ll keep playing on the same number of rows. You’ll also benefit from moving wilds that wander around the reels as you play, leaving a trail of wilds in their path. All in all, a maximum win of £/€/$250,000 is possible, a truly staggering sum.

Ecuador Gold is a gorgeous looking slot with some great features and plenty of prizes that will keep you playing over and over again. Not only does it look fantastic, with excellent symbols and high-quality backgrounds, but the addition of some novel mechanics and a huge potential win also make it a pleasure to play.