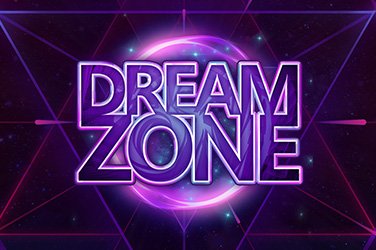 If you like your high concept slots then we’ve really got a treat in store, because Dreamzone is set in a sort of digital alternate reality among the stars where time has no meaning and geometric shapes are everywhere.

Some people prefer a good old romp under the sea or in Ancient Egypt, but you can’t deny that the abstract ideas are fun and trippy even if they don’t make an awful lot of sense. So is Dreamzone a surreal masterpiece that will also make you rich, or is it just a mess? Let’s take a look at our Dreamzone review.

It’s unusual in today’s world of impressive visual slots that often let you down under the hood, but this slot really does prioritise its gameplay over its looks! That’s not to say the game looks bad, and it might remind some older players of Tron or retro gaming at the arcades thanks to its simplistic geometric light shapes in the background that you progress through with each spin, but don’t expect any sweeping narratives or exciting animations here. The symbols too are just a variety of different shapes including triangles, stars, diamonds and arrowheads, and though they are nicely rendered and animated there’s nothing much deeper than that about them. Speaking of animations, this is one area where this slot’s visuals excel, with exciting light shows and impressive effects flashing about the place as you make wins.

One feature we really must introduce at this point is the cascading reels because it’s a very important part of how this game works. Each win causes the winning symbols to be removed and lets the other symbols fall down further on the screen, creating more combos as they land. Each win in a row generates one of four possible bonuses at random, which you collect on the left of the screen, then use on every spin where you don’t win in order to help make money. This makes the game pretty unusual in the sense that all of the bonuses occur in the main game, but it’s exciting and interesting all the same. We’ll explain how these bonuses work below, but keep in mind that your potential jackpot is 2500x your stake and the RTP is 96%, so you know there are already some good returns in the offing.

Each win you generate in this game grants you one of four bonuses, which are: up to five wilds added to the reels, all instances of a low paying symbols changed to a high paying symbol, up to four symbols removed, and one type of symbol acts like a scatter and does not need to be in a row to pay. These are all powerful effects and are applied to non-winning spins as a sort of consolation prize which also might turn a non-win into a win and generate a whole new cascade of wins. The biggest bonus is activated when players manage to clear the whole screen, granting three free spins with a 2x multiplier. This can keep going, and if players can keep clearing the screen then they can keep getting extra free spins and doubling the multiplier up to a max of 512x.

While Dreamzone slot game’s looks might polarize, we don’t see how you can fail to enjoy the fun of the bonus rounds, which drop a whole heap of randomness into the mix and potentially create some huge wins out of nothing. This is definitely a slot for lovers of volatility, but the generous prizes mean you won’t feel cheated, especially when you’re racking up some monster multipliers!