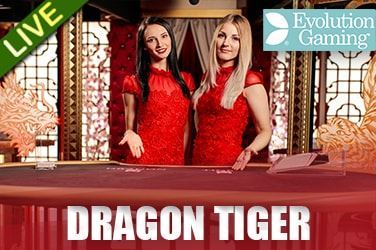 Brought to you by Pragmatic Play, the Dragon Tiger Slot Game takes you on a trip to China and features five reels, four rows and 1,024 paylines. The fully optimised design allows for complete compatibility across all devices, including laptops, desktop PCs, tablets and smartphones.

With a Return to Player (RTP) of 96.50%, the Dragon Tiger Slot Game is considered a medium volatility game.

The Dragon Tiger Slot Game is visually impressive, with high-quality graphics throughout. Golden dragon and tiger statues surround the reels, with a fiery glow in the backdrop. The Chinese theming is strong, and it’s further supported by the accompanying soundtrack.

In terms of symbols, you’ll find the usual set of low-paying playing card royals – 9, 10, J, Q, K and A – with higher value symbols represented by the rabbit, fish, frog and tortoise symbols. The tiger is the most rewarding, offering 7.5 times your total stake if you land a full house of five. The golden dragon is the wild, and can only appear in the central three reels.

The Dragon Tiger Slot Game’s minimum bet sits at $/€/£0.20 per spin, with the highest possible wager limited to $/€/£100.00. With a varied range of available stake options, both new and seasoned slot players should enjoy playing this game.

The Dragon Tiger Slot Game has just one key bonus feature – the free spins round.

Trigger the free spins round by landing a minimum of three Dragon Tiger logo symbols in any position across the reels. The exact number of free spins you’re rewarded with will be determined by how many logo symbols trigger the feature. Three, four or five will result in eight, 15 or 20 free spins, respectively, and you’ll also pocket a prize worth two, ten or 20 times your total stake.

It’s possible for the golden dragon wild to land on the middle three reels during the feature, and each will come with a two, three or five times multiplier attached. Multipliers will be combined if you manage to land more than one wild in the same winning combination, and it’s possible to retrigger the feature by landing a further three, four or five scatters.

The Dragon Tiger Slot Game is a highly entertaining slot with excellent theming and a fantastic, responsive design. The graphics are high-quality and the accompanying soundtrack creates an exciting atmosphere. It’s relatively simple in terms of bonus features, but the free spins round is really enhanced by the addition of the wild multipliers. You can quickly rack up some serious additions to your prize pot if you land more than one wild on the same free spin as the multipliers will be combined. Overall, it’s an excellent game that both high and low rollers should enjoy playing thanks to the varied range of stake options.