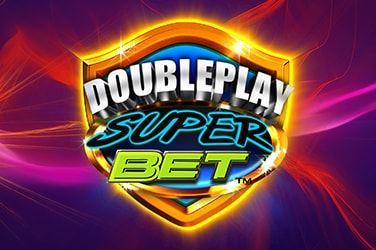 The Double Play SuperBet slot game is one of the many machines on the market that was delivered by the excellent NextGen Gaming team. You rarely get a bad game from these and this one certainly isn’t one. It was released in 2015 so has a lot of the modern trends.

There is a fair bit going on with regards to the interface but it doesn’t take as long to get to grips with as you might imagine. The graphics are more average than normal, with the classic style incorporated more. You can play Double Play SuperBet on a desktop, mobile or tablet device

A classic slot machine feel has been created on the Double Play SuperBet slot game. Many of the icons in use are the same as you would get in a land casino slot machine and that is very much the vibe which runs throughout the whole game. The slot itself contains five reels and up to 25 different paylines.

As mentioned there are a lot of classic icons in this game. The lower paying ones include the cherries, spades and horseshoes while the payouts creep up for the stars, bells, the sevens and the diamonds. The Double Play logo is the bonus icon in this game.

There are a couple of different bonus offerings in the Double Play SuperBet slot game. We’ll get to the ones which the game is named after shortly but before then there is a Free Games feature. You need three or more of the bonus icons on the reels to land this feature and when that happens you receive 15 free plays.

There isn’t a set figure for the RTP rating of the Double Play SuperBet slot game. This is because the extra plays bring about a different rating but depending on the level of the machine you play the RTP is between 95.04 and 95.88% – both below the average and against the player.

Double Play SuperBet is a very classic game. That is deliberate because NextGen are keeping things simple so that you can concentrate on the different bet types that are available to you. The graphics and the soundtrack are normal level fayre but the level of payouts that can be achieved in this game are much better than the usual offerings. The potential to win big makes this one of the better slots on the market.