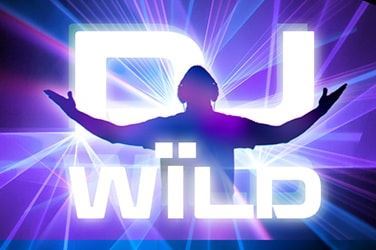 Scandinavians are known for their love of electronic music, with some of the world’s biggest DJs and electronic artists hailing from the wild and chilly climes of the north, so it’s no surprise that Swedish outfit ELK Studios are the ones to bring us this DJ themed game.

With a bouncy and cleverly integrated series of electronic riffs and beats an integral part of the game it’s certainly a feast for the ears, but does it have the cash to match? Let’s take a look in our DJ Wild review.

This slot packs a strange combination of symbols into its theme, using space-age looking fruit as its low-value symbols and DJ equipment as its high-value icons, including synthesizers, headphones, keyboards and mixing decks. This does a great job of making you feel like you’re in a cool, urban nightclub, but we must admit to being a little underwhelmed by the graphics. It does look like something that wouldn’t have been out of place 15 years ago and it feels a little static, though that said it certainly has a better soundtrack than most slot’s games, with music that feels responsive to what’s happening on the screen.

The game itself is fairly traditional, operating a five-reel and three-row setup with a total of 10 paylines, while the betting limits are pretty high and range from £/€/$0.25 to £/€/$100. For reference, the highest payout is 1,000x your stake when you land five synths, so not a bad return for a single spin! This game also pays both ways, a nice touch for the player which makes wins more likely, as it doesn’t matter in which direction your combo is formed. It also explains why the RTP is a pretty average 96.1%

Unusually for a traditional slot, DJ Wild doesn’t have a dedicated bonus round such as a free spins game. Instead, the base game comes with five types of wild that can help you win cash when you land them! While they all look the same on the reels, they are each accompanied by a favourite DJ effect such as jets of fire, a smoke machine, strobe lights, lasers and a confetti cannon which signal which wild you have landed. These will expand either horizontally or vertically when they land to cover an entire row or an entire reel, generating serious bonuses and granting a re-spin after each one, allowing you the chance of landing more. A final type of wild, known as the DJ or Jackpot wild, is your real ticket to stardom: Land this on the 3rd reel and you immediately win the top jackpot of 1,000x your stake, while landing it when the rest of the reels are also filled with wilds grants you an incredible 50,000x your stake.

DJ Wild is fun and a little different, but nothing that special to look at. This might put some players off, especially when there are so many gorgeous slots out there, but if you look a little deeper and get to the prize money it can be surprisingly rewarding. The inclusion of so many wilds and re-spins makes for a lot of big money opportunities, and it’s all the better if you happen to like the style of electronic music this game features because there’s a lot of it!