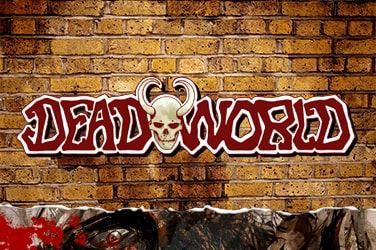 The Deadworld slot game is another of the many machines that was created by the team at 1X2 Gaming. This creation was released into the market in 2016 so it is a relatively new game with many traits you would associate with a recent release.

The visuals to Deadworld are strong and true and backed up nicely with an excellent array of sounds. As you would expect, you can play the Deadworld slot on desktops, mobiles and tablet devices.

The Deadworld slot is based on the material of the original comic book of the same name. There is a zombie theme to the game and a bit of a dark edge to it. Deadworld is a video slot which has five reels and as many as 50 paylines.

There are 12 different icons that will land on the reels. They are either humans or zombies with the characters you will come across including The Mummy, Spike, the Bikini Girl, The Mexican and the Queasy Rider. Other icons include The Veiled Assassin, Tribal and Pony-Tail, who will assist you in slaying the zombies. The skeleton is a symbol to keep an eye out for. This is the highest paying regular icon. The Bandaged Woman is the Wild while the long-haired zombie is the bonus icon.

There is a bonus feature attached to Deadworld and it is something a little different to the norm. You need to land three, four or five of the bonus symbols in a combination. Depending on the size of the combination you’ll receive either 20, 50 or 300 coins but then you get taken to a new world that has the look of a fairground shooting game about it.

Here is where some skill comes in. You’ll see moving targets in the shapes of zombies go across the screen. Your task is to shoot them with the half a dozen bullets you are given. Each time you successfully shoot one you will win a monetary prize or receive more bullets. You can keep playing this round until you run out of bullets to fire.

The Deadworld game does not rate very well in the RTP rating stakes. The rating is 95% which is way below the average and against the player for a slot these days.

There is a lot to like about the Deadworld slot game. The graphics, the theme and the background are all great and the playability of the base game is very good with all the different zombies and the humans who can slay them. The downside to the slot is that you kind of feel a little short-changed with the lack of features. A slot with these graphics and enjoyment deserves better features. That said, the bonus feature is enjoyable and you can win well if you are accurate with your shooting. We like this slot despite the way it leaves you wanting more once you have finished with it.