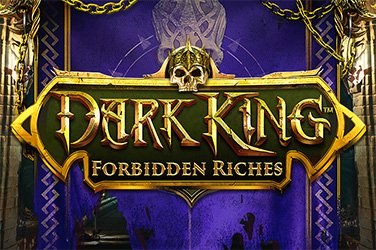 If you prefer drinking coffee and staying up all night to a cup of cocoa and telly before bed, or if you would rather stay inside and listen to shouty music than play outside with the other kids, then this game is probably for you.

For all its foreboding imagery and the gloomy aesthetics, the Dark King: Forbidden Riches slot game looks amazing, we have to admit. These are video game quality graphics, and from the dark altar behind the reels covered in grizzly faces to the terrifying dark knight to the left of the reels who reacts to your game, the whole thing has been created with a huge amount of attention to detail. While the low-value symbols on the reels are the generic 9 – A given a scary gothic makeover, the high-value symbols are various hideous servants of the dark king including a plague doctor, a skeletal horseman, a dark knight wielding a whip and a horned warrior. It almost goes without saying that the animations are fantastic, with ghost hands shooting across the screen, jets of fire and lightning and thick mists enveloping the reels as you play, while a bombastic gothic soundtrack really brings it all together.

The action looks very high stakes and you’ll feel that way too, because this game has a mammoth maximum bet of £/€/$400, so you can really nail those big wins and make yourself extremely rich in just a few spins! Having said that you’ll have to bet high to get your prize because the maximum win you can get from the normal symbols is a pretty low 25x your bet for five Dark King images. A second symbol, the mystical orb, acts as a wild and pays 25x as well as substituting for other symbols to make wins. It’s a bit of give and take, but with an average RTP of 96.06%, you can be sure that you won’t be short-changed in the end.

Another reason to be cheerful about those low prizes is that this game relies on sticky wilds to up the ante in the main game and bonus round, so you could find your score boosted pretty nicely after all. You get a multiplier when more than two wilds land on the screen anyway, maxing out at 5x your score if you manage to land five at once, but this gets even more tasty in the free spins round. This is activated by landing up to five of the red crystal scatters in one spin for 15 free games, during which time a cross shape will be overlaid on the reels. Land wilds in that cross and they’ll stick there for the rest of the free spins generating wins, while your wilds multiplier remains in place as well, so, all in all, you can land quite a large total.

Dark King: Forbidden Riches is a rollercoaster of a slot, which combines gorgeous graphics and a truly extraordinary setting with some fun little bonus features to create a really interesting slot experience. The nature of the game means you’re likely to land lots of smaller wins rather than one biggie, but there are still those awesome wilds to think about, and you might end up a big winner after all!