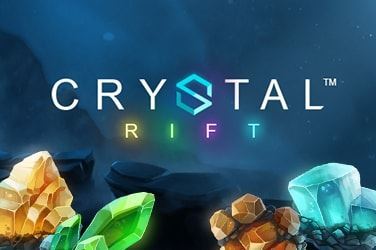 Developed by Rabcat, the Crystal Rift Slot Game is an adventure-themed slot. The layout comprises five reels, three rows and 25 paylines. The design is fully optimised, allowing players to enjoy complete compatibility and a seamless gameplay experience across all of their devices, including touchscreen tablets and smartphones.

With a Return to Player (RTP) of 96.00%, the Crystal Rift Slot Game is considered a medium volatility game.

The Crystal Rift Slot Game is visually outstanding, with stunning graphics that are typical of Rabcat’s high-quality slots. The reels refresh with a smooth dropping motion, and there are amazing animations that illuminate the screen whenever you land a winning combination. The subtle soundtrack adds to the overall atmosphere, alongside exciting sound effects to celebrate any wins being added to your pot. The setting for the game is a large, dark cave, which is very dimly lit by the emerging sunlight in the top left corner. There’s a mysterious yellow glow flooding into the screen from the right-hand side.

In terms of symbols, there are eight in the standard set. They include crystals of varying colours and shapes. The wild is represented by a cluster of semi-transparent cubes and can substitute for all other symbols within the game to help form winning combinations. Each time you spin, you’ll notice a grid pattern appear behind the symbols – this works in conjunction with the wild, which we’ll explain shortly.

The Crystal Rift Slot Game’s minimum bet sits at just $/€/£00.25 per spin, with the highest possible wager limited to $/€/£50.00 per game. This range of available stake options leaves the game relatively open to all players, including both high and low rollers.

When a winning combination is formed during the Crystal Rift Slot Game, that combination of symbols will disappear and be quickly replaced by new symbols which smoothly drop in from above. This will continue until you’ve made three more winning matches, at which point the intriguing wild grid will activate.

Once triggered, on each spin, a hexagon pattern will appear behind the symbols. Three consecutive winning bonus falls will illuminate these positions, which will be replaced by wild symbols. The following spin will then take into account the new wild symbols, resulting in increased winning potential. Further winning combinations landing will trigger the wild grid feature again.

The Crystal Rift Slot Game is a visually enticing slot with outstanding graphics that appear crystal clear no matter which device you choose to play using. The colours are vivid, and each animation is smooth. The accompanying soundtrack builds up an exciting atmosphere which is further enhanced by the reactive sound effects whenever you form a winning combination. The wild grid is an interesting addition that can seem a little confusing at first but can result in significantly boosted winning potential during subsequent spins.