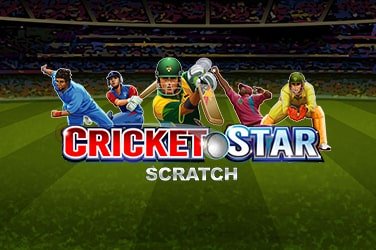 Developed by Microgaming, the Cricket Star Scratch Game is an extension of the popular Cricket Star Slot, now in virtual scratch card format. The game has a three by three layout with the chance to win up to 10,000 times your total bet value. The design is fully optimised, so you can enjoy the game across desktop PCs, laptops, tablets and smartphones.

With a Return to Player (RTP) of 95.04%, the Cricket Star Scratch Game is considered a very high volatility game.

The Cricket Star Scratch Game shares the same graphics and imagery as the original Cricket Star slot Game, so any player who has previously played the original version will know what to expect from this familiar release that draws more than just inspiration. The scratch card sits in front of the immaculate, freshly cut grounds, and we can see that plenty of people have turned out in support of the game. There’s an accompanying upbeat soundtrack with the spectators cheering in the packed stadium as you scratch, adding to the overall atmosphere and excitement.

The game features a three by three grid layout and works in a similar way to usual scratch cards. Players will need to ‘scratch’ to reveal the symbols. To win a cash prize, you’ll need to match three identical symbols across the nine spaces. You can choose to scratch each panel individually or select the high-speed option to uncover all nine symbols simultaneously.

The Cricket Star Scratch Game is a quick yet entertaining scratch game with strong theming, following on from the original Cricket Star Slot. If you’re lucky, you can scoop significant winnings by matching three jackpot symbols.