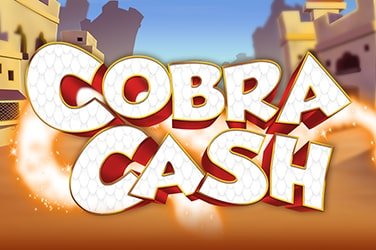 Developed by Core Gaming, the Cobra Cash Slot Game is a snake-themed slot that transports players into a mysterious world filled with venomous cobras. The layout features six reels and four rows, and there are 40 winning ways. Players can play on any device, including those with touchscreen functionality, thanks to the fully optimised design.

With a Return to Player (RTP) of 95.30%, the Cobra Cash Slot Game is considered a medium volatility slot.

The Cobra Cash Slot Game is visually impressive, with a vibrant and colourful design. The backdrop is an Arabian setting, which is visible behind the semi-transparent reels. The accompanying soundtrack features soft flute sounds and sets the atmosphere for the game.

Symbols-wise, you’ll find low-value playing card royals – 10, J, Q, K and A – alongside an array of themed symbols. There’s the Cobra Cash game’s logo (which is the highest paying of the standard symbol set), alongside a smiling blue cobra, two crossed swords, and a magic basket. There’s also a wild, which is clearly identified by the word ‘WILD’ and can substitute for all other symbols apart from the bonus icons.

The Cobra Cash Slot Game’s minimum bet sits at $/€/£00.40 per spin, with the highest possible wager limited at $/€/£100.00 per spin. This leaves the game relatively open to both new and seasoned slot players.

At any random point during the base game, you might find the reels spinning longer than usual to perform one of the seven available reel modifiers. Each cobra has its own unique modifier and will chain together a predefined number of symbols and transform them into wilds. The Grass, Mamba, Rattle, Viper, Boa, Python and Anaconda snakes will link together and transform four, five, six, seven, eight, nine or ten symbols, respectively.

There’s also the option to trigger free spins by landing at least three bonus symbols in any position across the reels. You’ll get seven free spins initially, alongside an added bonus feature for extra entertainment. Bonuses include:

Snake Bite. During each spin, the snake will bite between one and three times to turn two to six symbols into wilds.

Snake Eyes. There’ll be a chance to land a random snake each spin.

Snake Adder. This will add a new, ungraded snake on each non-winning spin.

Snake Ladder. The snakes will increase in size with each spin.

There’s the chance to retrigger the feature by landing a further two, three, four, five or six bonus symbols on the reels, which will result in three, five, seven, ten or 15 additional free spins.

The Cobra Cash Slot Game is an entertaining slot that engages players through exciting bonus features. The free spins bonus round is relatively easy to trigger, and we really like the way that there’s an extra bonus applied to the round. It’s also easy to retrigger the feature, resulting in further free spins. Overall, the setting is impressive, with high-quality graphics and a decent soundtrack. We’d recommend taking your chances to charm these snakes, as the payouts can be significant.