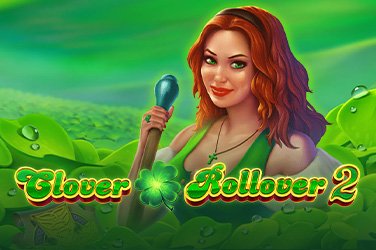 Not every slot player is a high roller with years of experience on every type of slot game, and for some people, it’s more about that little thrill involved in spinning the reels and trying your luck. If you can do without all the bonus rounds and tricky little mini-games and you just want a pared-back slots experience, Clover Rollover 2 is a good choice.

Developed for bingo sites way back in 2008 the original looks a bit dated, so here comes the sequel with updated graphics and even higher payouts than before. So will you be lucky in this field of shamrocks? Let’s take a look in our Clover Rollover 2 review.

It may be simple, but that doesn’t mean that developers Eyecon have skimped on the graphics. The game looks stunning, with an animated field of windswept clover swaying and whirling as the backdrop on a sunny, dew-spattered spring morning in Ireland. The symbols look great too, and one of the best things about this game is how everything is always animated and exciting. Lush 3D graphics bring an admittedly generic selection of Irish symbols to life, from a golden Celtic cross to some pints of stout, a glistening pot of gold and a leprechaun’s green top hat. These symbols constantly dance, flash, spin and jig about the place when they’re spun, and are highlighted in electrical fire when they form a winning combo. Add the infectious sound of Irish reels from the background music and it’s hard not to get swept up in the mood!

On top of all this, Clover Rollover 2 is a game of contrasts. On the one hand, experienced players may be disappointed by the low betting limits, which fall between £/€/$0.01 and just £/€/$10. Here the game shows its lineage as a game targeted at converting bingo players to slots, and so it can feel like a bit of a sandbox without real risk. However, the lack of bonus rounds means that all of the money is to be won in the main game, and you get amazing prizes like 10,000x your stake for landing shamrocks across the reels. That’s pretty impressive considering you don’t have to jump through any hoops or play mini-games to get it, though the RTP is still pretty low at 93.98%.

We said this game is uncomplicated, and one of the results of that is that there are no bonus rounds at all. There aren’t even wilds or scatters, it’s just a case of spin and play. This may be a big turnoff for players who enjoy the bonus rounds in other games, but that doesn’t mean there are no bigger prizes. The Mini, Mega and Maxi jackpots are randomly awarded as you spin the reels, with a total potential prize of a massive £/€/$100,000, so while there’s no skill in winning it, you probably won’t care if it drops into your bank account!

The Clover Rollover 2 slot game is a gentle, easy ride that still looks amazing, so you won’t feel like you’re being short-changed. It’s definitely not for high rollers or people who like complicated bonus rounds and mini-games in their slots, but with some pretty decent prizes on offer for the lucky ones, there’s still a chance of finding that pot of gold at the end of the rainbow.