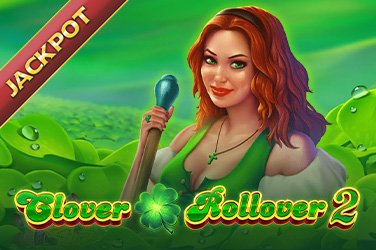 Casino77 players will hope they have the luck of the Irish with this Clover Rollover 2 Jackpot title from Eyecon.

Check out this Clover Rollover 2 Jackpot slot game review to find out what you could receive if your luck is in!

Having simply adopted a progressive jackpot to their classic title, Casino77 players will instantly recognise and know what to expect in regards to visuals and graphics that have been provided in their Clover Rollover 2 slot game.

Eyecon have a habit of taking inspiration from the Irish themes, however they work a treat and continue to do so, especially when they have been implemented in the great way that they have.

Players will be taken to a calming green field that features a beautiful blue sky that has a white, fluffy cloud situated above the playing grid.

The playing grid, which has been adorned with a golden trim, features a total of 5 reels and 3 reels, as well as 5 paylines. Those playing this game can place a minimum bet of just $/€/£0.10 per spin, whilst the maximum bet stands at a respectable $/€/£50 per spin.

Eyecon have kept the Irish theme going strongly with the symbols that they have included on their paytable, as our Clover Rollover 2 Jackpot slot game review team found that there are a number of icons that fit it perfectly.

Upon review, we found that the traditional royal playing card icons are followed by pints of ale, a green top hat, an Irish woman, a Celtic cross, a pot of gold with a rainbow and a shamrock.

Furthermore, the addition of the jackpots is the biggest appeal, with the shamrock playing a part in how they are won.

As mentioned, the biggest and main Clover Rollover 2 Jackpot bonuses available in this slot game is via the use of the three jackpots that are available to collect.

With the introduction of Mega, Maxi and Mini jackpots that continue to build up as the game is played, players will feel they are in a position to be able to win some big rewards when they are able to trigger them. Players who land 5 shamrocks will be able to unlock a % of the jackpot, depending on their wager amount.

With a return to player (RTP) rate of 93.98%, Casino77 players can not be too disappointed as Eyecon have made this Clover Rollover 2 Jackpot slot game available with a low volatility rate. This means wins can be expected frequently, although they may be of a low value.

As can be seen, the main appeal of this online slot game is the Clover Rollover 2 Jackpot bonuses, with players able to potentially win big if they trigger the top prize. Furthermore, the game provides a relaxing feel, which is why so many have already looked to take advantage of this low-volatile slot title from Eyecon.