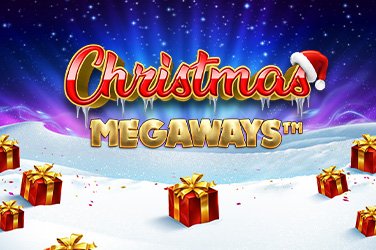 With Christmas supposed to be a happy and joyous time of year, this Christmas Megaways review will leave players feeling as happy as possible as it identifies all of the Christmas Megaways bonuses available, such as free spins and multiplying wilds!

Unsurprisingly, the Christmas Megaways slot game captures the festive theme expertly with how it has been designed, as it is clear that developers, Irondog, have spent time on providing players with a top experience.

There is a magical background that features a snow-covered floor, as well as some truly spectacular purple lighting that provides the magical element described. There are also a number of Christmas presents scattered around the background, thus helping to bring the festive theme to life.

The playing grid has a total of 6 reels and the potential of 7 rows, although those Casino77 players who have played slot games with the Megaways mechanism will already know how different each reel can be. Furthermore, they will already know that there are 117,649 different paylines in which winning combinations can be formed on!

Irondog have made this Christmas Megaways slot game available to play from as little as $/€/£0.20 per spin, or for a maximum bet of $/€/£20.

The Christmas Megaways review team were left unsurprised by the fact that there are a number of Christmas-themed symbols available to collect on the paytable, with items such as traditional royal playing card icons that have been decorated with festive decorations, a bauble, a candle, a pile of Christmas presents, a golden sack of presents and a shining Christmas tree.

There is a star that represents the game’s wild, whilst there is also a multiplier wild that can appear up to three times on one spin on any reel bar the first.

For some Casino77 players – depending on their location – a ‘Bonus Buy’ option may be available which will allow for them to directly enter the free spins game. Players who do this will be able to purchase 6, 8 or 10 free spins with up to 1 locked reel.

Another of the Christmas Megaways bonuses available is the increasing multiplier that can be found in the free spins game. This multiplier will continue to increase with each cascade that happens, with no limit on the level it can reach!

Players can also lock reels that show up to 7 symbols, therefore keeping them in place for the duration of the bonus game.

The return to player (RTP) rate for this Christmas Megaways slot game is 96.20% and has a volatility level that consists of a medium rate. This means the top prize of 40,000x the bet could be in reach more often than initially thought, although it will be incredibly hard to achieve.

After reading this Christmas Megaways slot game review, we are confident you’ll be as happy to play this online slot game from Irondog as you will be to wake up on Christmas Day and open all those presents that Santa left!