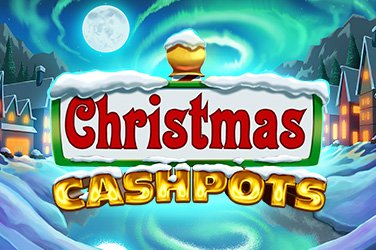 If you’re feeling up for some lighthearted festive-themed fun, look no further than this Christmas Cashpots Slot Game. Brought to you by Inspired Gaming, this slot is jam-packed with happy holiday vibes and wonderful wintry wishes.

With a Return to Player (RTP) of 96.5%, the Christmas Cashpots Slot Game is a medium to high volatility game, with a fun bonus feature offering free spins for bigger wins.

The Christmas Cashpots Slot Game has a vibrate design which exudes the Christmas spirit. Set within a tranquil snowy village scene, the theme consists of twinkling lights and playful candy canes, all of which add to the cheery atmosphere. The accompanying soundtrack is a jolly, jingling tune, which plays alongside well-paired holiday ‘ho, ho, ho’ sound effects.

The symbols are equally as Christmassy and include gifts, stockings, elves, toys, and Santa riding in his sleigh. The latter two are the top symbols to watch out for as they offer the biggest payouts.

The minimum bet with the Christmas Cashpots Slot Game sits at $/€/£00.10, with the maximum allowable bet set at $/€/100.00, The game has a five-reel by three-row layout, with ten paylines

There’s the chance to win up to 2,500 times your stake with the bonus feature in play.

The Christmas Cashpots Slot Game’s key attraction is the Cash Collector Free Spins round. This is where the sack full of presents comes into play; this acts as the cash pot symbol, so you’ll need to land a minimum of six to activate the bonus round.

Once triggered, you’ll be rewarded with five free spins, throughout which only cash pot, Santa collector, and blank symbols can land. The initial cash pot symbols will transform into sticky symbols, landing only on reels one to four. The fifth reel is kept for filling with up to three Santa collector symbols, which will stay in place for the duration of the round once landed.

The aim of the game is to land the most sticky cash pot symbols you can before the free spins are used up, hopefully completing reels one to four with a total of 12. Once the bonus round ends, if you’ve landed at least one Santa collector on the fifth reel, your winnings will be calculated, and you’ll be awarded the total cash amount accumulated throughout the round. Landing two or three Santa collector symbols will result in double or triple multipliers, respectively.

The Christmas Cashpots Slot Game is a good choice for anyone wanting to get into the festive spirit, as everything about the theming relates to Christmas. The maximum win potential of up to 2,500 times your stake is appealing, and the Cash Collector Free Spins bonus round adds excitement. It’s unlikely that high rollers will want to play the Christmas Cashpots Slot Game continuously, but less-seasoned players will enjoy giving it a go.