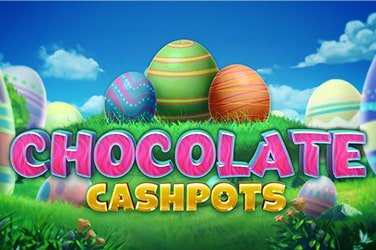 Easter is always a fun time of year for many as it means there is plenty of chocolate around to enjoy. Indeed, our Chocolate Cash Pots review team found that to be the case here, whilst the bonuses certainly help to make this adventure rather exciting!

Easter is the order of the day for Inspired Gaming with their Chocolate Cash Pot online slot game, as this Chocolate Cash Pots review found that many of the visuals and themes used by the developer fit that particular narrative.

There are a number of bright and vibrant graphics and visuals to have been used, including the symbols that appear on the 5-reel, 3-row playing grid that has been provided. There are a total of 10 paylines available, with each of these being fixed on each spin.

Speaking of spinning the reels, players at Casino77 can place a minimum bet of just $/€/£0.10 or a maximum bet of $/€/£60 on each turn of the reels that they decide to make in this ultra-fun themed online slot game.

As mentioned, our Chocolate Cash Pots review team found that the game focuses and is heavily influenced by an Easter theme, so it came as no surprise when checking out the paytable that many of the items found can be associated with the holiday.

There are the traditional royal playing card icons, although these have been given a splash of chocolate, whilst they are then followed by items such as chocolate eggs, and animals that can be considered to be of an Easter narrative, such as a lamb, a chick and a bunny rabbit.

There is also a symbol that is represented by the game’s logo, which has the ability to pay the biggest rewards when five appear on the reels.

One of the Chocolate Cash Pots bonuses available to trigger in this game is the ‘Cash Collector Bonus’. This game will be triggered when six or more of the cash pot icons appear with a basket collector symbol being on the reels at the same time.

Once the bonus has been activated, players will notice that the positions on the reels that do not contain any of the aforementioned symbols will respin for a maximum of 5 times. Once the round comes to an end, players will then receive a reward that is calculated and applied instantly.

Inspired Gaming have also provided their ‘Spin Chance’ feature as one of the Chocolate Cash Pots bonuses that are available. Here, if players have lost on the game enough for their credit to drop below what is required to play, they will get another chance to spin the reels in the hope of triggering a win.

Our Chocolate Cash Pots review found that the return to player (RTP) rate for this online slot game is 96.5% and features a medium volatility level.

Casino77 players who are looking to enjoy an Easter-themed adventure should look to play this game as soon as possible, as our Chocolate Cash Pots review team found that they had plenty of fun whilst playing it, whilst the Chocolate Cash Pots bonuses certainly helped to further enhance the happiness and fun that can be experienced around this holiday period!