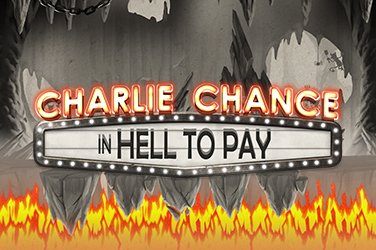 With a number of Charlie Chance in Hell to Pay bonuses available, Casino77 players will love the opportunity to go back to the 1920s with this impressive Play’n GO title.

Play’n GO’s Charlie Chance in Hell to Pay online slot game is a game that has been designed expertly well and provides players with a huge amount of fun via the visuals and animations provided.

Players will be taken back to the 1920s as they can see an animated black-and-white movie being played out in front of them whilst they are able to spin the reels that resemble a classic fruit machine look.

There are just 3 reels available to spin, each with 3 rows, whilst there are a total of 5 paylines in which wins can be recorded.

During our Charlie Chance in Hell to Pay review, it became apparent that players of all budgets can play this game, as bets can be placed from as low as $/€/£0.10 per spin, or they can be placed at a maximum bet of $/€/£100 per spin.

There are a number of classic-looking symbols available in this game, with the Charlie Chance in Hell to Pay review team finding that players could look to form winning combinations from a range of traditional fruits – such as cherries, lemons, apples and grapes – whilst there is a BAR icon, a 666 icon and a pair of golden bells.

Furthermore, there are a couple of wild icons that appear to be burning with flames whilst there are also a number of special feature symbols.

Those special bonus feature icons play a huge role in helping this Charlie Chance in Hell to Pay slot game to be even more enjoyable than it already is, as they provide punters with the chance to record some lucrative wins where possible.

The she-devil icon that can appear in the game will attach itself to regular icons and when three of them appear, players will be taken to a bonus wheel where they will be able to win one of the following bonuses that are available:

Players who land the free spins game will receive a total of 8 free spins whereby they will need to be able to collect as many scatter icons as possible to try and trigger the bonus wheel once again.

Our Charlie Chance in Hell to Pay slot game review team found that the return to player (RTP) rate for this game stands at 96.23% and comes equipped with a volatility level that is considered to be of a medium rate, therefore making wins potentially appear rather frequently at times.

With so many great Charlie Chance in Hell to Pay bonuses available such as free spins, multiplying wilds and guaranteed wins, there is definitely something available for all players who decide to play this impressive Play’n GO slot game.