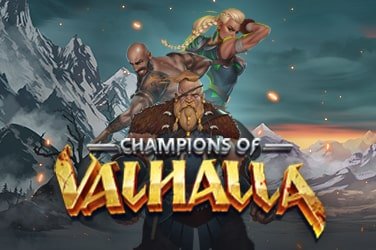 Viking themed slots have exploded in popularity in recent years, spurred by the serge of the Norse pantheon and Viking legends explored in blockbuster movies, TV-shows and video games. However, the result of this has been quite a lot of cookie-cutter slots leaning on the same themes, imagery and gameplay over and over again.

Viking myth is big, bombastic and epic, so it’s very important for any half-decent Viking slot to look good, and so it’s lucky that the Champions of Valhalla slot game delivers handsomely on that score. This game opts for a high-quality cartoonish style reminiscent of a comic book, and while the characters have outlandishly large swords and everything seems to be carved from stone or gold, there’s no doubt that it’s beautifully drawn and rendered.

A pair of carved stone Valkyrie heads flank the reels, pulsing with lightning as you spin, while a desolate battlefield adorns the background, featuring ragged banners, broken arrows and a wrecked longship abandoned in the snowy wastes. There are no generic symbols in play here either, and the low-value symbols are depictions of Viking equipment such as ornate helmets, study looking longships, horns, axes and swords. Alongside these, the high-value symbols revolve around Viking characters like the ‘berserker’ as well as the Gods themselves: Thor, Freya and Odin. Alongside the high-quality graphics, exciting animations accompany events on-screen to really set the scene for battle.

Under the hood this game is less exciting, utilising five reels and three rows with 25 paylines to play with. Betting falls in a narrow range between £/$/€0.25 and £/$/€12.50, so this may not be a slot for the high rollers, but an RTP of 95.1% is pretty average for the industry and means there’s not a huge risk for low rollers either. As well as the other symbols there are three special symbols to look out for; the wild, feature wild and bonus symbol.

The wilds in this game both take the form of a Viking rune, which normally just acts like a regular wild and is able to help you complete combos by taking the place of other symbols. However, sometimes these runes are struck by lightning which explodes across the reels and electrifies several other symbols, up to a 3×3 grid. After a short battle animation in which Odin takes on several foes, these symbols become sticky wilds for a re-spin.

Alongside this special feature is a more conventional free spins game: Land up to five shields carved with Odin’s face to unlock up to 12 free spins, during which the other bonus can also activate. You’ll be taken up to a different background, and you’ll finally see Valhalla, a magical world of floating rocks and towering golden halls. There are also three random progressive jackpots that can be won at any time, and the prize is determined by the way your fellow players have been betting.

Champions of Valhalla slot game gets ten out of ten on the visuals, managing to deliver a great looking artistic style that is distinctive enough from its rivals to be recognizable while still hitting all the usual Viking beats. The animation is great too, but the low betting limits and mediocre prizes aren’t so great, and there aren’t too many bonuses to get excited about either.