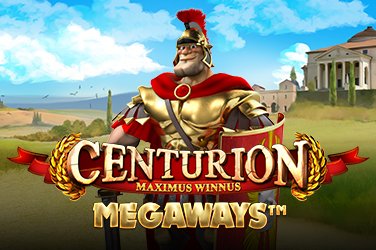 The Centurion Megaways Slot Game is brought to you by Inspired Gaming. This entertaining, Roman-themed slot has a six-reel design and a variable number of rows. There’s the chance to play with an immense 117,649 winning ways thanks to Big Time Gaming’s Megaways mechanism. The exact number of paylines on any given spin is determined by the number of symbols per reel – seven on each row will provide you with the maximum number of paylines.

With a Return to Player (RTP) of 95.90%, the Centurion Megaways Slot Game is considered a medium volatility slot.

The Centurion Megaways Slot Game has an impressive design. The reels sit inside a Roman stone structure, complete with large columns for an opulent feel. We can see various greenery towards the front of the screen while the bright blue skies sit behind.

In terms of symbols, you’ll find the Centurion Megaways Slot Game’s logo, a chariot, the Colosseum, a shield and swords, a helmet, and a coin. The lower-value symbols are represented by various playing card royals – J, Q, K and A. There’s a wreath symbol that acts as the wild, which is clearly identifiable as the word ‘WILD’ is engraved into it. This wild can only appear on the horizontal reel during the base game.

There are a number of reel modifiers that can activate randomly during any base game spin. They include:

Super Bonus Reels. Additional bonus symbols will be added to the reels with a view to make it easier to trigger the main feature.

Big Win. You’ll be rewarded with at least 20 times your stake.

Minimum Ways. The next spin will use the minimum number of paylines.

Maximum Ways. As above, but using the maximum number of paylines.

Mystery Symbol. Mystery symbols will be added to the reels, and they’ll all transform into the same symbol.

The Bonus Wheel feature can be triggered by landing between three and eight bonus scatters in any position across the reels. You’ll be able to spin a wheel to reveal one of many prizes. The more scatters you start with, the fewer the number of choices on the wheel will be. The top prizes include:

Wild Power/Super Power Spins. Receive three or four free spins with added wilds that will lock in place and multiply your winnings by six.

Caesar’s/Super Caesar’s Free Spins. Spin a further wheel to determine how many spins you will play with, and confirm a starting multiplier value.

Prizes/Super Prizes On Parade. Press the ‘stop’ button to land on shields and collect cash prizes alongside free spins.

The Centurion Megaways Slot Game is an exciting slot that is packed with bonus features for added entertainment. There’s the chance to add significant winnings to your prize pot throughout the game by activating one or more of these fantastic features. The graphics are excellent, as are the smooth animations and fun sound effects.