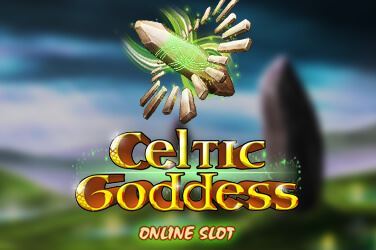 The Celtic Goddess Slot Game is powered by 2by2 Gaming and brings you an entertaining slot with a five-reel by three-row layout and 30 winning ways. The Irish-themed slot transports players on a trip to the Emerald Isle through the fully optimised design. It’s compatible across all devices, so you can play on laptops, desktop PCs, tablets and smartphones.

With a Return to Player (RTP) of 96.02%, the Celtic Goddess Slot Game is considered a medium volatility slot.

The Celtic Goddess Slot Game has a visually impressive design, with high-quality graphics and smooth animations. The reels are bordered by a delicate stone frame, with the Celtic Goddess herself standing to the left, holding a glowing green orb.

The theming continues among the game’s symbols, with the lower value symbols represented by the usual playing card royals in Celtic designs. Higher value symbols include the story’s characters, a pot of gold, a sword, a spear and a menhir.

The Celtic Goddess herself acts as the wild within the game, appearing only on the second and fourth reels. With the exception of the scatter, she can substitute for all symbols to help form winning combinations. She will also apply a multiplier value to any wins she helps to form – a win with one wild will be doubled, and a win with two wilds will be quadrupled.

There are two bonus features in the Celtic Goddess Slot Game – the Goddess Feature, and the free spins bonus round.

The Goddess Feature can be randomly activated on any spin. When triggered, the goddess will transform all lower value playing card symbols into one of the higher value symbols, re-evaluating any wins that were formed during that spin.

The free spins bonus round can be triggered when you land three, four or five bonus symbols in any position across the reels. When you do so, you’ll be rewarded with eight, 12 or 16 free spins, respectively. There’s no option to retrigger the free spins round, however, the Goddess Feature will activate after each spin to boost your prize pot.

The Celtic Goddess Slot Game is a superb slot that offers a lot of entertainment for all players. The theming is excellent, with high-quality graphics and an overall clean and polished look. The animations are smooth, and the lively Irish soundtrack that accompanies the reels adds to the overall atmosphere. The free spins feature is easy to activate and tends to trigger regularly throughout the game. We’re a little disappointed that this can’t be retriggered by landing further bonus symbols, but it’s great to see that the Goddess Feature activates after each spin throughout the round, as this can result in significant wins.