Home » Playngo » Cat Wilde in the Eclipse of the Sun God

Cat Wilde In The Eclipse Of The Sun God Slot Game 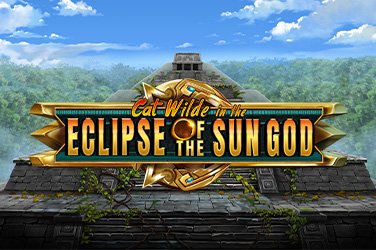 Here in this Cat Wild In The Eclipse Of The Sun God Slot Game Review, we will give players all the necessary information before you get going and start placing bets. The details we’ll cover are the general gameplay, if there are any Cat Wilde In The Eclipse Of The Sun God Bonuses to speak of (spoiler, there are; free spins, cascading reels and a multiplier feature), what the RTP and then a general review of if it is a fun game to play.

When you think of the top online slot game producers, the name that probably first springs to mind is Play’n Go. They have been making top quality games for many years now, and have deservedly earned a reputation for engaging and attractive slot games.

The Cat Wild In The Eclipse Of The Sun God Slot Game is no different. From the background to the menu screens, to the reels and symbols, this game has been designed exquisitely.

This is a standard three row and five reels slot game, with 20 paylines. The minimum bet is $/€/£0.20, with the maximum being $/€/£100 per spin. Think carefully about your slot game experience before selecting how much you wish to bet with.

The symbols have been elegantly designed. The idea is to match between three and five symbols across the reels. The lower valued ones are the standard playing cards, from 10 through to Ace. After that, the compass, skull and key are worth slightly more, with the most valuable being the Cat Wilde symbol; three are worth x1.25 your original stake, four are worth x5, while landing all five are worth a mighty x37.5 the original stake.

Cat Wilde In The Eclipse Of The Sun God Bonuses

What kind of Cat Wild In The Eclipse Of The Sun God Slot Game would it be if we didn’t cover the bonus features! Play’n Go has included several here. Everytime you land a winning combination, the cascades feature begins. Winning symbols are knocked off the reels, while new ones drop down to replace them. If these then land a winning combo, the cascade begins again. This will continue to happen until no more winning sets hit the reels.

There is also a multiplier feature linked to the cascades. The first win leads to a x1 multiplier of the initial stake, the second a x2, the third a x4, and the fourth a x10. So there really is a great chance for top prizes.

In addition to those, there is also a free spin feature, which begins if you land the moon goddess scatter on the first, third and fifth reel. If the symbols fall kindly, it can lead up to 40 free spins, which are then linked to a potential x70 multiplier.

It is another top game from Play’n Go. The graphics are great, it is fun to play, and with the numerous Cat Wilde In The Eclipse Of The Sun God Bonuses, there is a big chance of winning some top prizes.