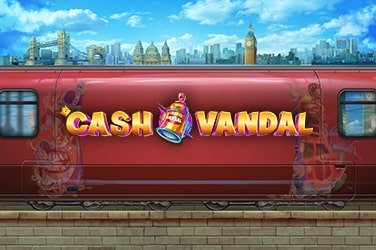 Brought to you by Play ‘n’ Go, the Cash Vandal Slot Game transports players to Europe’s biggest street art cities to discover cash, gold bullions and diamonds. The four-reel by three-row design is fully optimised, offering complete compatibility across all devices, including those with touchscreen functionality. There are ten paylines in play.

With a Return to Player (RTP) of 96.00%, the Cash Vandal Slot Game is considered a high volatility slot.

The Cash Vandal Slot Game is set in a dingy subway station – the reels are set on the side of the vandalised carriage – we can see various graffiti designs to the left and right of the reels.

You’ll find a modern interpretation of familiar fruit machine icons – there are cherries, oranges, watermelons, blueberries and raspberries, all in a graffiti style. Higher-value symbols include shiny diamonds, rolled up wads of cash, and glistening gold bars. The spray paint acts as the wild, substituting for all symbols apart from the scatter. Four wilds across any winning way will result in a reward worth 50 times your total stake.

The Cash Vandal Slot Game’s minimum bet sits at a reasonable $/€/£00.15 per spin, with the highest possible wager set with a relatively decent upper limit of $/€/£75.00 per spin.

The golden spray cans represent the scatter symbol in the Cash Vandal Slot Game. The respin round results in various changes to the game, depending on how many scatters you land, and what position they land in. For example, a spray can landing on the fourth reel only will result in the reel being locked in place as the remaining reels respin. If scatters land on reel four as well as other reels, the City Feature will be triggered.

When you activate the City Feature, you’ll be rewarded with an additional spin, with the fourth reel transforming into a fully stacked wild symbol. You’ll then hop on the subway, getting off at one of three possible cities, each of which has its own modifier to accompany the free spin. The three cities are:

Paris. The first and second reels are synchronised through the addition of a two by two ‘mega symbol’ that connects them both.

Berlin. Two or three wild symbols will be added across the first, second and/or third reels.

Trigger the free spins bonus round by landing a scatter on reel four at the same time as two or three other scatters across the other reels. If two scatters land, you’ll receive five free spins. If you land three scatters, you’ll get ten free spins.

Stacked wilds will appear on the fourth reel during the round, and one of the three cities will be randomly chosen on each free spin, applying the associated reel modifiers. You can retrigger the free spins round an unlimited number of times by landing further scatters in groups of two or three.

The Cash Vandal Slot Game is an entertaining slot with plenty of exciting features. We particularly like the free spins modifiers and the unlimited number of times the free spins round can be retriggered. There’s the potential to rack up some serious winnings through this feature.