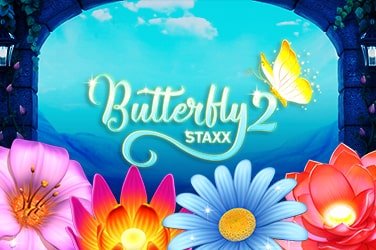 Butterfly Staxx 2 is a slot game by NetEnt, one of the biggest software providers working in the business today. This sequel to the Butterfly Staxx was released in 2019 due to the success and popularity of the original. The slot consists of a colourful backdrop, featuring bright yellow butterflies and vivid flowers, bringing the whole game a relaxed, laid-back feel to it.

It is a nice-looking slot with detailed graphics, smooth animation, and a pleasant soundtrack to boot, and it probably goes without saying that it will appeal to fans of the original game keen to play an improved and updated version. The slot is played as if you were to be looking out of an arched stone window at the top of a castle and the reels are spinning in front of you. There is an array of colourful flowers either side of the window frame, the mixed theme of the medieval castle and butterflies is an intriguing combination that works well.

Butterfly Staxx 2 features five reels, four rows, and 40 fixed paylines. Groups of two to five matching symbols across the reels will payout, and all of the game’s symbols, including the titular butterflies, can be stacked. The yellow butterflies are the highest paying symbols in the game, while the lower value symbols are simple J, Q, K, A icons. The game’s wild is a blossoming flower symbol, while the scatter is represented by an arrangement of pink roses. The game’s regular mechanics are pretty run of the mill, but the special features do add a little extra interest.

What do the symbols represent?

Butterfly Staxx 2 has a range of different symbols to keep players entertained, with the butterfly being the most valuable, of course! Players need to match 3 and 5 symbols on a payline in order to win. Here is all you need to know about the paylines and how each symbol pays:

Butterfly Staxx 2 features free respins as well as a choice of two other bonuses, which is quite a lot of features for a simple game like this. Respins can be triggered by landing a full stack of butterflies on any reel, and any butterflies which land during respins will move to the left and stay on the screen – this can result in some big wins with a bit of luck. This is similar to how it worked in the original Butterfly Staxx, however this special feature been built upon to make it even more thrilling. If a player can fill the 2 leftmost reels with butterflies then they will unlock a second set of reels, and if they can fill the 3 leftmost reels with butterflies then a third set of reels will be unlocked. The extra reels add to the excitement of the slot as players can increase their winning chances by 2 or 3 times.

The other bonus features are triggered if you manage to land three scatter symbols in one spin; this will give players the chance to pick between two special features – the Butterfly Spins free spins round and the Butterfly Frenzy Pick-and-Click Bonus Game. Both of these bonuses can be quite lucrative, with the free spins round potentially netting players some nice winnings.

Like most games by NetEnt, Butterfly Staxx 2 is playable on mobile devices including iOS and Android smartphones, so players who prefer to play while out and about should not have an issue. Players can access Casino 77 via their internet browser in order to play anywhere, at any time! This is a game changer as players will not just be limited to playing on their desktop device, instead having the freedom of playing this great game whenever they would like. The low volatility of this game also means it is ideal for playing in short bursts.

Butterfly Staxx 2 has an RTP of 96.35%, which is average or just slightly above; it is certainly enough that casual players need not worry about the game’s win ratios, though players who only play those slots which offer the very best odds might consider anything lower than 97% to be a bad deal. It is a low variance game, so wins come in frequently, but big windfalls are harder to come by. The minimum bet that can be placed on a spin is $/€/£0.25, with the maximum bet being up to $/€/£1,250 so this slot covers the small to large betters who love to entertain themselves with online slots.

Butterfly Staxx 2 is a decent improvement upon the original game. While the first Butterfly Staxx was a very entertaining game, this sequel is a step up and keeps the attractive graphics. The likeable theme is kept but with some additional interesting mechanics, resulting in an overall much better slot game. The special features are incredibly fun and add an extra twist on the original game, at the same time boosting player’s winning chances. See our promotions section to claim a fantastic new customer offer of $/€/£100 plus 20 free spins when signing up, this will give you a great head start when beginning to play.