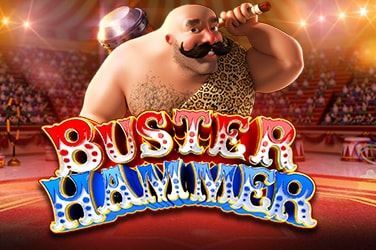 There’s nothing that compares with the magic of the old big top circus. The clowns, the wild animals, the amazing acrobats and daredevil performers, and while those days may be behind us, there’s still the Buster Hammer slot to help us recapture some of that magic. Buster is the titular circus strong man, complete with leopard skin leotard and comically oversized hammer, who is going to help you enjoy the fun of the circus and win some amazing prizes too.

So will you come out feeling like a ringmaster or a clown? Let’s take a look in our Buster Hammer review.

Game developers NetEnt have put a lot of effort into setting the scene in this slot, with some top-class design and quality circus sound effects combining to create an atmospheric package. The game is packed with nostalgic circus design, from the gaudy carnival fonts to the shadowy interior of the big top tent in the background. Buster Hammer himself accompanies you in the game, and he waits patiently by the side of the reels for you to land wilds, but more on that later. Wins are accompanied by topical circus sounds and slick little animations, which all add to the experience.

This game has five reels, three rows and 243 ways to win, so expect the success to come thick and fast as you play. The lower value symbols are 10 – A presented in classic carnival font, while the performing seal, elephant and lion make up the high-value symbols. Also to look out for are the Buster Hammer logo, which acts as a scatter, and the wooden hammer which is the wild. While that’s about it for the main game, one extra detail is the shockingly high betting option, which lets you wager from £/€/$0.25 all the way up to a whopping £/€/$625 per spin, one of the larger maximums out there. This all adds up to an RTP of 96.33%

On top of the main game are a few interesting and potentially lucrative bonuses scattered around. The first is simply triggered by landing a hammer wild anywhere on the reels as part of a combo, at which point Buster springs into action. He’ll hit the Test Your Strength machine beside him with his hammer, which will reveal a random multiplier which is then applied to the win. The more wilds you land at once, the more multipliers you get, which stack and are all applied to your win.

A final extra feature is triggered randomly at any time in the game when a performing seal appears at the bottom of the reels juggling brightly coloured balls. Choose one of these balls to reveal a random cash prize, but remember that any active multipliers are also applied to this prize, so if you happen to land the seal during your free spins round or in conjunction with wilds, you can boost that prize by up to 75x.

The Buster Hammer slot game is full of surprises and offers a few quirky ways to win cash that make it a little different from the norm. Not only does it look really good, sticking religiously to the theme and delivering some great sound effects and animations, the combination of a huge betting limit and frequent generous multipliers mean you could be walking away with some big prizes while you have fun.